I am using rock5b with ubuntu server image, it works well, but hdmi connector does not display anything.

I want to install ubuntu desktop with cmd as below:

is it accesible over ssh

And how to get the linux sdk? 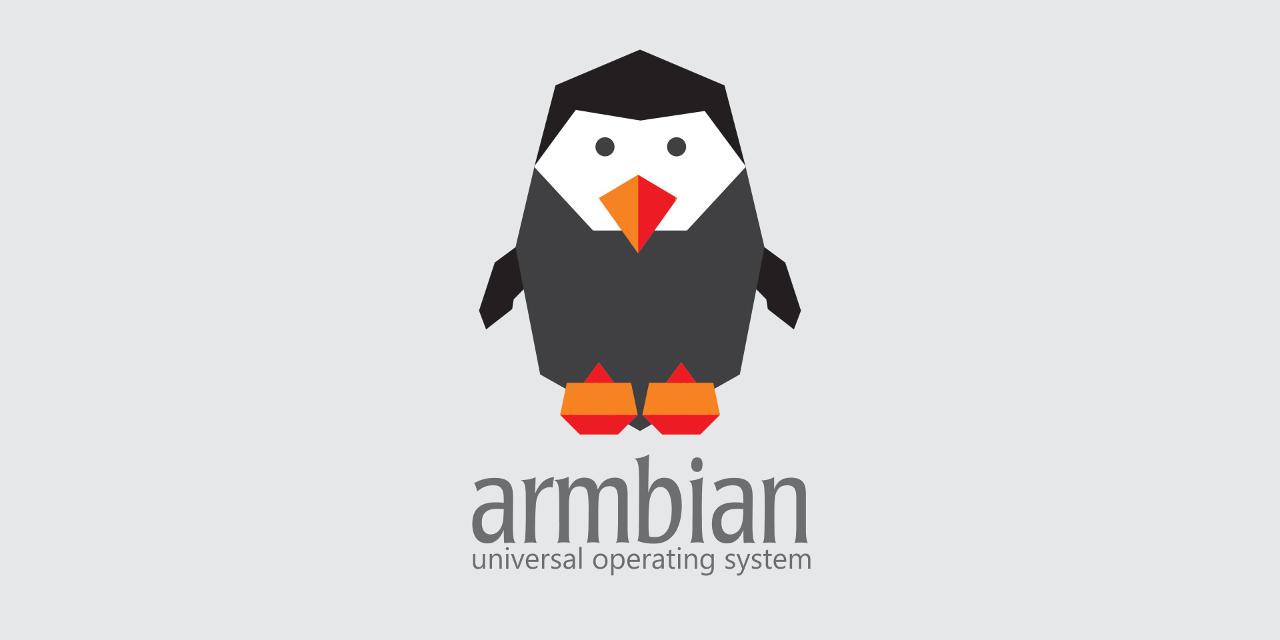 But I want to ROCK5B like a PC, so need desktop better.

try to update the board over ssh with

if it still doesnt work try to reinstall the desktop

then it should reboot and go to a gui

My experience is very bad with ubuntu desktop. It is very slow, I could say unusable.
Not only, often the desktop seems crash without any reason, the session lack with the system that show me the login.
I can’t understand how some testers tell that this board is so good, I’m really disappointed by this board.
Also tried with debian image, the xfce version is a little bit usable than ubuntu (gnome), I also tried plasma version (all desktop effects off) with same result, but the main problem still present: the session lack suddenly and unexpectedly.
There is anyone that had same experience?

I was quite disappointed too with debian xfce, looking like we are back in 98’.
I’ve seen some graphical issues as well. From what I’ve seen before, contrary to android, current graphics acceleration support is poor on linux for now

On my side I tried switching from uglish default interface to gnome-shell, but no luck yet.
When booting on GDM , I’ve got only xfce and a few other options proposed.
I also tried launching gnome-shell directly from command line, but it fails with an error too.

Looking at debian’s doc, all they say is: if command “gnome-shell --replace” fails after installing ‘gnome-shell’ package, it probably means our device doesn’t support it.

I guess we’ll have to wait for better linux support especially on GPU side. Given the big popularity of the rk3588 is getting, I would say it would come soon, hopefully

Opinions can vary so much

I am very happy with the desktop! Everything works stable, smoothly and quickly. I use Debian/XFCE and I don’t find it ugly or dated at all, but very elegant and modern with the transparent composite settings. 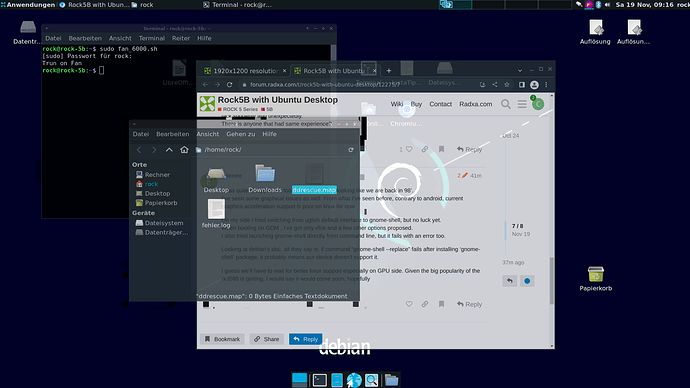 (Of course, the active window is otherwise not transparent. This was caused by the screenshot tool)

Little Hint: Use tasksel to install a desktop to Ubuntu Server or Debian! That work’s fine.

With Ubuntu Server just install the gui (gnome) with apt, it “works”. With Debian the same, just install plasma with apt.
Both configurations have some issues, I have no idea, the experience is that the gui session (sometimes) stop suddenly with a black screen, after some seconds the login appear. It’s unstable for some reason, I don’t know why: no customization, only defaults.
In addition the system is slow, gnome-shell with ubuntu, plasma with debian, have a high CPU usage about 30-40% on at least 4 cores.
I think this card is not suitable for desktop use, or at least not without 3D drivers.
Or maybe I was unlucky with a faulty board?

I’ll let you know once I get gnome-shell running. It should be available in Debian without switching to Ubuntu though.
This board is perfectly capable of running full desktop as I’ve seen somewhere it is 4 times more powerful than a RPi4
Also the android 12 seems to run very well and is probably as demanding as desktop
I think high cpu is expected if video drivers can’t use gpu hardware acceleration. It could also explain lack of stability but will see if I get that as well.

There is only the Debian image that is currently running the Mali G610 blob.
Because it is a blob specific to the Mali-G610 its been specifically put together to run on Debian XFCE.

If you want to do the same with Ubuntu you will have to learn what is required with DRM/MESA/Libmali and plumb it in all yourself.
There is much dev work but currently mesa doesn’t include the MaliG610 think its the G72 it stops at.
So standard installs will not work unless you get an image where someone has done the work already.

Always the same with a new SoC especially one like the RK3588 where it is ahead of the curve as was the 1st Raspberries.

Even then the current drivers are only giving a max gpu load of about 40% but results are still far faster than you will see on near all other Arm based SBC.

Its how things go and how open source design and software gets past the chicken and egg of release and does it incrementally often live whilst reverse engineering.
If you want a desktop and you don’t have much linux dev use the Debian image not Ubuntu, also likely its best to stay with XCFE until someone offers you something else.

Does it mean we get graphics acceleration with that blob on Debian? why would it be only with xfce?

I finally managed to get gnome-shell up and running on debian. it works but a bit laggy, some graphical glitch as you can see on picture below around windows borders. 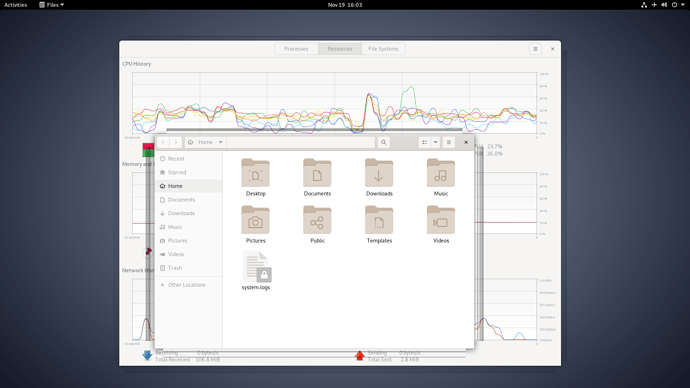 Alsoif you look at cpu usage curves behind, you see pretty much 40% of CPU wasted doing nothing. If gpu support doesn’t work with gnome shell, that could explain

Its running XCFE X11 as that is what they got it going with at 1st.
Currently Icecream is doing some great work at trying to get Ubuntu 22.04 wayland and others going as are likely others.

so it’s only partial GPU hardware acceleration we get for now? is it likely going to improve in near future.

This board looks amazing on paper, just waiting to unleash its full power on linux. I think RPI fundation was successfull in upgrading their hardware not too often and provide good support on software side.
Community is as important as hardware

Looks like the same for rk3399 being here for many years, and well supported. Let’s hope 3588 will follow the same path.

Yeah the driver isn’t working well when it comes to cpu/gpu parrelism something to do with the Command Stream Frontend but already past what I know.
But the Mali G610 is so much faster than much its still for many working extremely well.

Really the ideal situation is to get off what is a Rockchip BSP Board Support Package and go mainline and this is part of the chicken and egg of getting many vendors and a herd to get momentum behind it.
Currently mainline just about boots with no hdmi and outputs to a uart console so you have x2 lots of effort those who are trying to make the BSP as good with certain setups as possible and another section aiming for a shift to mainline.

Exactly what I said before: there is some kind of constant cpu wasting, the rendering is buggy as you noted, even with plasma on Debian.
I specifically wanted to try the two distros to exclude problems on this level, the result is the same: system fatigue, general slowness, problematic rendering.
Without properly gpu driver I think this board is unusable as pure desktop system without compromise, al least for now. Maybe it’s too young for now.

Maybe it’s too young for now

think so. we are all on same boat waiting for linux support to improve.
after all this board isn’t even available for sell yet, just preorder were delivered so hopefully it should gain more popularity in coming weeks

if raspberry shortage carries on this could become the best alternative and drain even more users, but linux support needs to improve

Yes, my intention was not to say that it is not suitable for desktop use in a general way, rather not right now.
I’ve read better things for other competitors with the same chip, moreover with ubuntu 22.04. They probably success with graphics drivers, hopefully this will happen soon with radxa as well.

you mean with rk3588 soc?
I wonder why we couldn’t benefit from it, as it is same chip so should use same drivers?

This guy does a great job at promoting rk3588 based board on his channel, he reviewed quite a few already. last is one called nanopi r6s

He might test on linux later, we’ll see if it performs better but I would expect same issues…