Hopefully this post gets pinned as there ins’t enough clarification on this point.
Using ROCKPI-m2-extend V1.6 board.

when removing the SD, board can’t boot to NVME.

Is there no solution to just burn working image to NVME and boot?

UPDATE: Solution solved… Once SPI is correctly flash no need for the SD always in. Ubuntu server 20.04 and Debian Desktop image are both booting off the NVME.

OK! Booting!!! So, the answer for me was: At the point that you have mtd0 mounted, to erase and rewrite the SPI, so I ran: /usr/local/sbin/rockpi_erase_spi_flash.sh and then /usr/local/sbin/rockpi4c_write_spi_flash.sh (took about 15 minutes to execute) Shutdown, unplug the SD card, and boot! I watched the blue activity LED with gloom in my mind, but then it came on, and I am now booted in! One weird side-effect is that I now cannot boot from SD (unless I remove NVMe - as in the boot order…

Thank you for the reply.
The issue is solved I recommend you update your wiki. 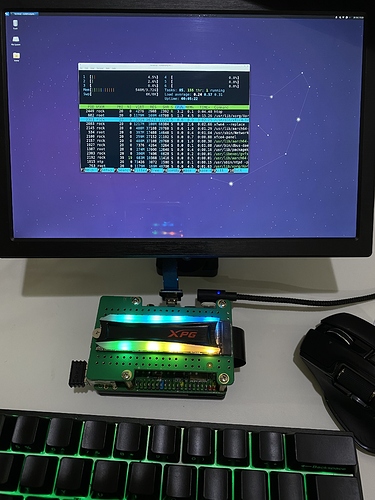 The issue is solved I recommend you update your wiki.

Can you explain what content we should update? You can edit the wiki with register too

I had no luck with method two. Used method one. Now boots from nvme SSD. The problem I have is trying to install Radxa APT. Wget command not found. So unable to unmiminimize the system.

Minimal images tend to not have wget installed.
It’s quite simple to install it with,

I too have quite some difficulty getting this working.

I followed the advice from others in these forums to use the erase script then the flash script.
I did also execute sudo /usr/local/sbin/rockpi4b_upgrade_bootloader.sh but only because it was the first attempt with following the wiki.

Next, getting the NVMe to boot is really weird. I flash Debian 9 Desktop(Dual Display) on it using etcher.

Now if i only have my NVMe in the Rock Pi 4C (so nothing in the SD and eMMC) then it won’t boot at all. The blue led just stays on. If i add in an eMMC (not tried an empty one yet) but flashed with the same distribution then the Rock Pi 4C does boot! And it does so from the NVMe. I confirmed that by typing “df -h” and seeing that my NVMe was the / partition. It was also confirmed by downloaded files that were on my eMMC but not the NVMe.

Is this how it’s supposed to work?
So with an NVMe and and eMMC connected?

ok, I’v been doing some testing with Rock Pi 4C and crucial P1 M.2 1TB nvme.
I can successfully boot after running /usr/local/sbin/rockpi4c_write_spi_flash.sh as written above.
These are my results:

This is quite disappointing. The main selling point for the Rock Pi 4 is the M.2 interface in my view. I can’t understand that there hasn’t been more effort on the software side to make this board more usable.