Introduce ROCK 5A - Gift for the year of rabbit

That adds one additional SATA port or two multiplexed

Rockchip’s current SATA implementation is confirmed to support SATA port multipliers even with FIS-based switching so combined with an el cheapo JMB575 you can connect five SATA devices to the single SATA adapter in the M.2 slot.

And honestly I would rather put all my disks behind such a JMB575 PM than using any storage peripherals behind an USB3A receptacle (probably the worst connector ever invented): Quad SATA Hat Disconnects

I’m not complaining about their half backwards mismatched android kernel, this was expected, I’m complaining about their mediocre creativity when it came to board design. All the RPI cases I have will not work with this board unless I choose to not use the emmc. That’s the problem I have with my Rock 3A, along with the m.2 port.
I’m just saying they don’t have the software going for it, so why copy the horrible layout of the raspberry pi when there isnt any benefits?

All the RPI cases I have will not work with this board unless I choose to not use the emmc. That’s the problem I have with my Rock 3A, along with the m.2 port.

Did you desolder the bottom M.2 thingy on Rock 3A? If not why are you talking about the eMMC being in the way? This is how 3A looks like (and I fully agree that trying to mimic RPi form factor with 3A is somewhat laughable): 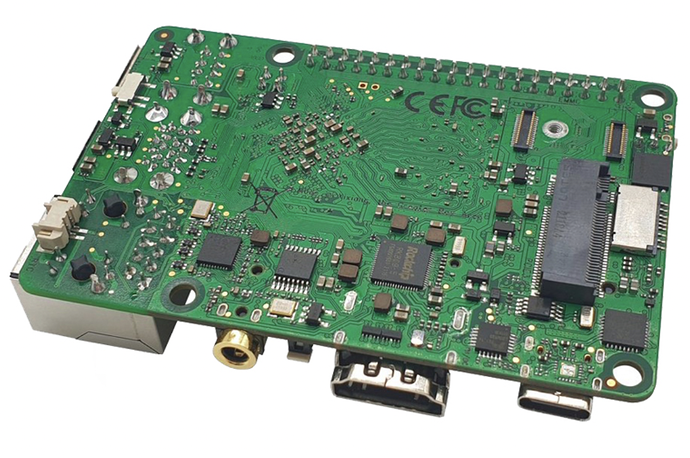 I was really glad the look-a-like Pi concept for Pi fans wasn’t employed on the Rock5b as really the 3a should of been similar as it does have great I/O for that price point.
The Mali G52Le or whatever it is, is a cut down G52 and not that great as really that SoC is about great budget I/O and so should of been able to mount a full length 2280 card than some convoluted hat affair that is needed to purely give a passing resemblace to a Pi.

I have got the OrangePi5 and its a great little desktop board with true entry level desktop performance, where if I/O is your thing you probably should go for cheaper IO rich RK3568 or more expensive RK3588.
I have ordered a R3 code as seem to be collecting RK3588/s as that Cpu/Gpu/Npu is so sweet and absolutely destroys a Pi4 by a very big margin.
The A type boards are just a minimalist version of their bigger B type siblings and probably should be even more minimal to give a bigger cost difference as in the 80/20 rule that CPU/GPU/NPU likely could fulfil most common uses.

There are a couple of things that continue to bemuse.
The Pi look-a-like as why.
Consumer grade PD power than a simpler fixed rail 12v that would be really handy to also have on gpio.
Also mobo switches that top of the range x86 style mobo just have cheap and cheerful jumpers because it gives the flexability of wired switches.

I think the Pi look-a-like has more effect on the Rock3a as the Rock5a prob has a more common use as a general purpose desktop whilst the great IO of the Rock3a has much of its cost effectiveness negated because of a Hat that is only needed because it is a Pi look-a-like.

Its not that much of a deal on the 5a but why Pi look-a-like is a complete bemusement to me especially when it doesn’t have a single advantage if its not 100% pi format compatible?

Does the RK3588s include CANbus support like its big brother 3588? And is CAN exposed on the GPIO like it is on the 5B?

If so this could be a fabulous board for 3d printer. Removes the need for the USB-CAN interface board, saving space and cost. More so if you start shipping them while raspberry is still supply constrained.

Is it not the other way round and its the rk3588s that gets the bus that can not be named? 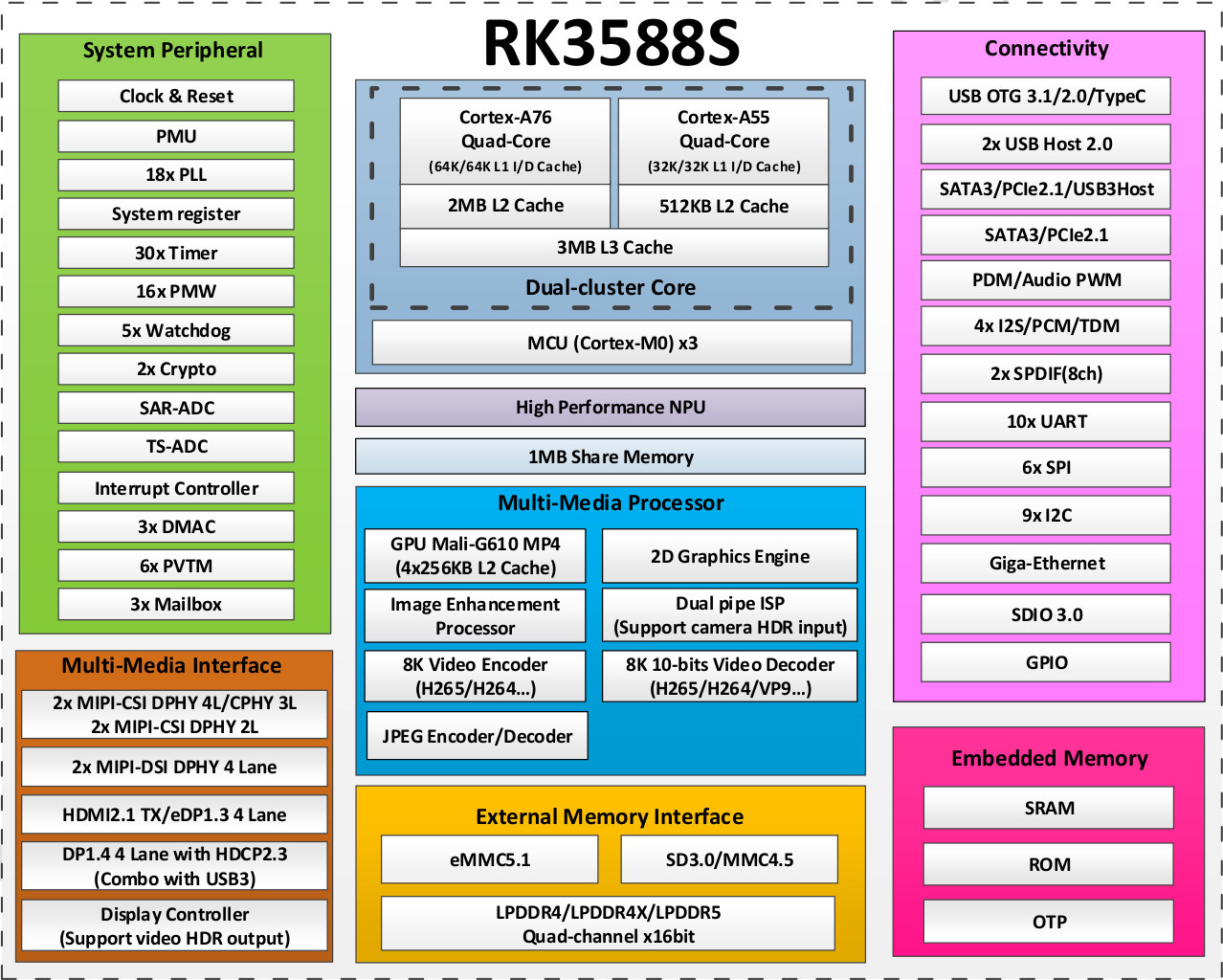 Rockchip RK3588S is a cost-optimized version of the RK3588 octa-core Cortex-A76/A55 processor with fewer peripherals, and I've been told it's been

the addition of three CAN bus

CANbus is definitely present on RK3588, not just an “addition” on the RK3588s. Radxa calls out assignments on the 5B GPIO pin out as pins 3&5 (CAN M1) and 12&35 (CAN M0). It’s not clear that any Linux disto has driver support for it as the drivers do not appear to be loaded in Radxa’s Linux.

That said - my hope is that Radxa exposes CAN the same way (or similarly) on the 5A as the form factor is more easily installed in existing 3D printer designs without having to create a new mount.

Seems both that cnx-soft article always had me thinking it was the rk3588s with twai bus and not rk3588 but seems both.
Think also there is a CM5 type board also planned that might even be better for that purpose, dunno which Soc though.

? I said the emmc module would be a problem on the Rock 5B, just like it is with the Rock 3A, along with the m.2 on the 3A. I’m not sure where you are confused? The point was the rpi form factor is ridiculous if it doesn’t get the benefits of fitting in a rpi case.

The point was the rpi form factor is ridiculous if it doesn’t get the benefits of fitting in a rpi case.

Applies to early revisions of Rock 4, to Rock 3A (which copies the former’s layout exactly) but not to 5A any more. RPi cases need to take at least 2.5 mm ground clearance into account:

No M.2 socket on the bottom any more -> no problem. And if there’s a problem with ground clearance on 5A then it’s more likely the fixation of the Ethernet MagJack…

Rockchip’s current SATA implementation is confirmed to support SATA port multipliers even with FIS-based switching so combined with an el cheapo JMB575 you can connect five SATA devices to the single SATA adapter in the M.2 slot.

Thanks for explanation, so it’s named FIS-based switching, not multiplexing.
I quickly found in shops sata card from 1 to 5, this makes that build even more interesting.

And honestly I would rather put all my disks behind such a JMB575 PM than using any storage peripherals behind an USB3A receptacle (probably the worst connector ever invented): Quad SATA Hat Disconnects

Totally agree, I assembled that NAS to learn something. After few tries it’s so far stable (running now for about two weeks without disconnects), and the main problem now is loud fans and rather high temperatures. I’ll try to replace pi with new Rock5a selling pi at almost same price. That should make this NAS much better and additional bays are just plus.

Sweet! I’m very happy to see that Radxa is carrying over the M.2 slot placement from the 4C+ and sticking with the RaspberryPi-esque form factor. I prefer this layout of interfaces and components over a similar offering from Orange Pi 5 (same 3588S). Radxa is smart to quickly follow up from their 2022 Rock Pi 5B with what I assume will be a cheaper but equally powerful offering. I am currently using the 5B with Armbian as a daily desktop and am very pleased overall with its performance and flexability. I’m only sorry that I missed the early purchase discount offer by a few days ;^(

CORRECTION: I just purchased the pre-order discount with success by clicking on the “Get the R3 Code @allnet” link at the bottom part of the announcement. When I previously looked at the AllNet China website I was initially disappointed to see that the offer was “sold out.” However, I’m very pleased now that I found this link.

Usually a 3 pin fan is voltage controlled with the 3rd being a tacho the above is a 5v fan with a gpio level PWM input and instantly makes it easier to control.

Thanks for that tip

I expect that changing board from rpi to rock5a will make huge improvement.
Also i plan to test several cooling solutions based on turbines and heatpipes, those should help a lot, beside noise and temperature there is also “dying sd card problem” that will be superseded by eMMC

Cooling always seems an after thought as the Rock5a doesn’t seem to have any heatsink mounts and once more with the m.2 and components a Pi Look-A-Like will likely not fit any Pi heatsinks apart from adhesive.
Orangepi5 is the same but the 30mm heatsink and fan I have seems to do the trick there was mention the rk3588s runs hot but don’t find much difference both run relatively cool for the performance and there is no OC on these socs.
I usually put a copper shim on as it can help with fast transients but prob isn’t needed, I purchased a pack of em so might as well use em.

Holes on board are same as on rpi, I don’t expect anything more than that. I think for the power of RK3588s it should be cooler on same usage, but still something must be optimized. Quad sata kit with designed board and case is just way too hot and noisy in winter time where it’s not that hot in room.
I also use some cooper, but never tried heatpipes and such approach and that should be efficient solution as it is in most laptops. Ok, I’ll write more about that idea when my Rock5A will be delivered

Another thing to remember is that the RK3588 series runs much cooler than the 28nm process on the rpi. A heat sink is sufficient to keep it from throttling.

Will this use the currently available POE hat ? or new one needed ?

That may be true for the RPI 4, but the Rock 3A does not fit in any of my cases for the RPI 3. After cutting hole for M.2, the emmc is still too thick, so I have to cut a hole for that too. I doubt there is clearance for emmc with the RPI 4 cases, and I dont have rpi 4 cases nor will I get a 5A to test.

Hello. What about Wifi / Bluetooth ? same issues expected as in Orange Pi 5 ?