Updating instructions for reflashing and booting off EMMC?

I’ve been scouring the forums and Google for the past week to figure out the correct steps to erase and flash a new distro onto my zeros (v1.4).

This led to another post where they suggested to run sudo boot-g12.py rz-fastloader.bin and run fastboot erase bootloader (Fastboot error: (remote: 'locked device'))

At this point, I still tried to run sudo boot-g12.py rz-udisk-loader.bin to get the radxa to appear as a usb device…which didn’t show up.

So then I eventually booted up a windows device, followed the Win10 steps to erase the emmc and mount the zero as usb drive and flashed the img with Etcher. The drive looks to be formatted correctly with a boot partition, but when plugging it in, the zero fails to boot and the screen remains blank. I’ve also used the windows partition tool to clear out the entire disk and ran Etcher that way to no avail.

Would it be possible to consolidate or update the instructions in an official way that consolidates all steps to resolve these issues?

From Linux booted from USB or SD card:

Then the /dev/mmcblk1 device should be writable so you can flash another OS or zero the eMMC with dd. NB: mmc numbering might vary/depend on the kernel version that is being run, but it will be the device with boot0 and boot1 subdevices.

I have to second this. I’ve spent all evening trying to flash the standard Ubuntu distro using the provided instructions, and many half complete, sometimes conflicting instructions on how someone got it to work.

The windows program crashes with some error code from fastboot (apparently). In Linux I am still getting the “locked device” error, even after running the above command and half a dozen other suggestions.

I’ve dd’ed the ubuntu image many times and it doesn’t boot. I was able to write u-boot to the device and at least get it booting to sdcard, but I paid extra for emmc and would like to use it.

I even tried the Khadas flasher, which has worked very well with their devices in the past, and it did recognize the device, but (I think) it didn’t like the image format. I suspect the add a wrapper around the image.

Edit: Let me add another half-complete, anecdotal solution that “worked for me”. I just tried again to flash the ubuntu image using rz-udisk-loader.bin, but, after dd’ing that, I dd’ed u-boot.bin, and now it appears to be working.

I don’t know if that fixed it, or if it would have worked just re-flashing the ubuntu image yet again, but it worked. If I had another new device with emmc I would try going to the process again to see if I could repeat it, but, unfortunately I don’t.

I support it , similarly only for Android . Why not give a disk image to upload via usb_burning ?

I did this mainly on a Linux machine. Specifically, Pop OS 20.10 (Ubuntu/Debian based). However, I did follow the instructions on Windows to erase the Zero’s bootloader “correctly” – but I don’t think it’s actually necessary. But since it’s the current “official” instruction set; it can’t hurt to follow. 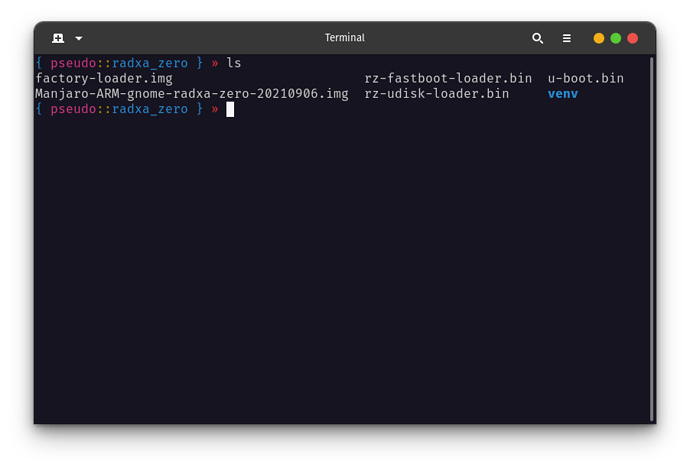 Follow the steps in the official instructions to get all the dependencies (e.g. fastboot, python3, pyamlboot) on your host machine

Make sure you push and hold the physical usb-boot button on the Zero before you plug it into a power source to ensure that the Zero boots into the proper mode for lsusb to detect it: 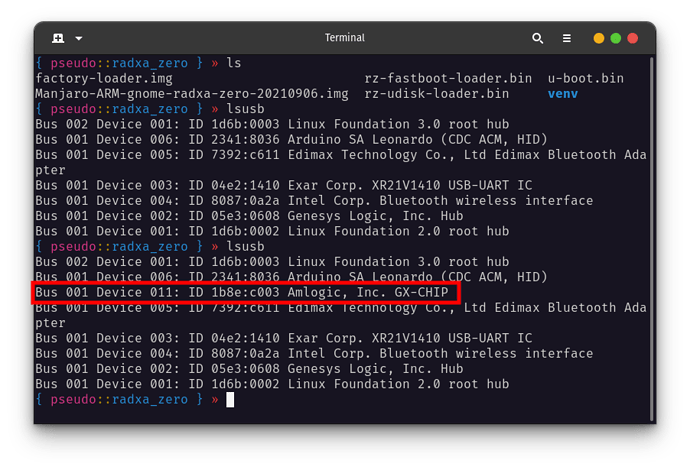 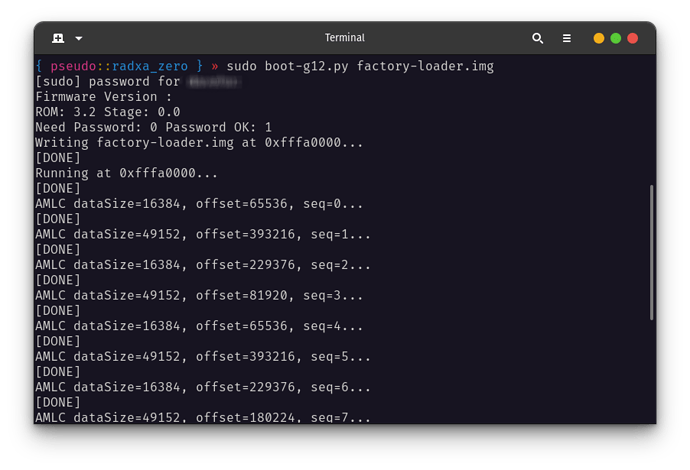 Use fastboot to unlock and erase the bootloader (but it fails): 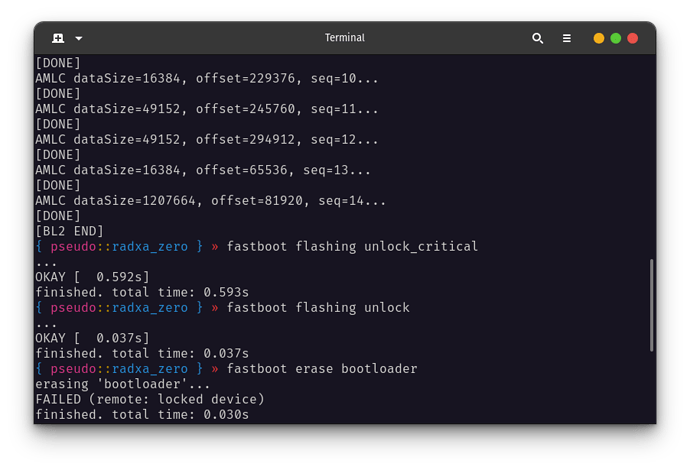 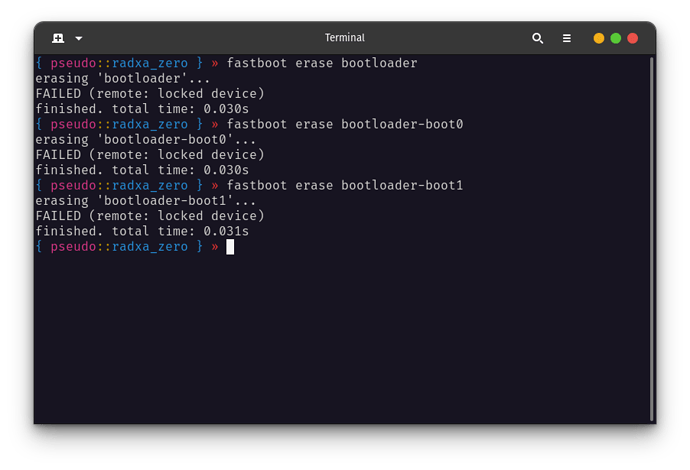 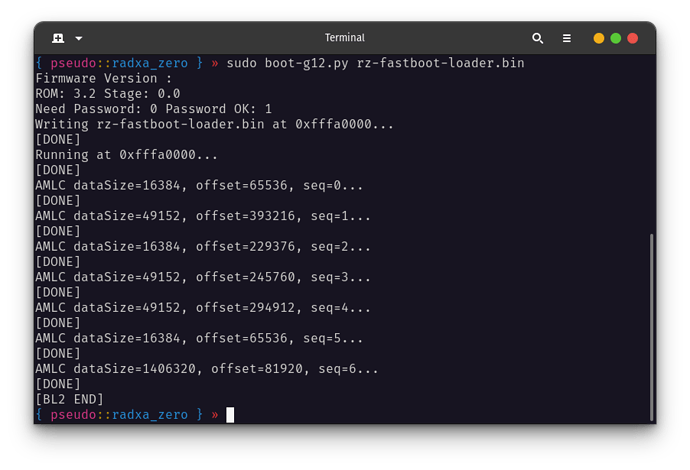 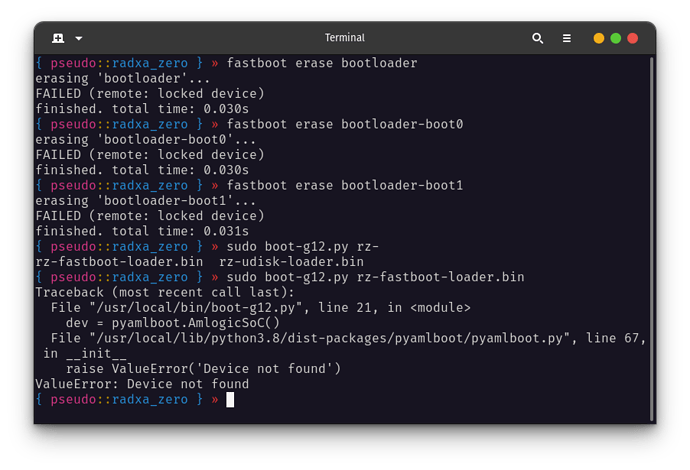 Now you can erase the bootloader…but not without some issues like erase 1 not working as the post suggests. In my experience, this didn’t matter as I would go ahead and use the default disk manager to delete the entire partition anyway… 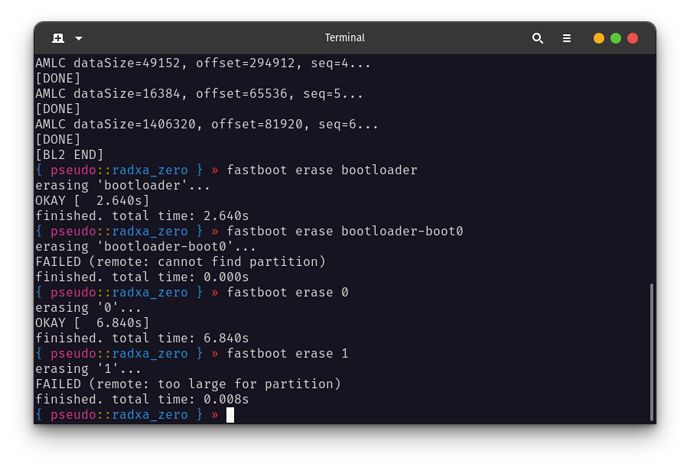 OK, at this point, you have somewhat cleared the EMMC and are ready to boot the Zero as a USB Disk. 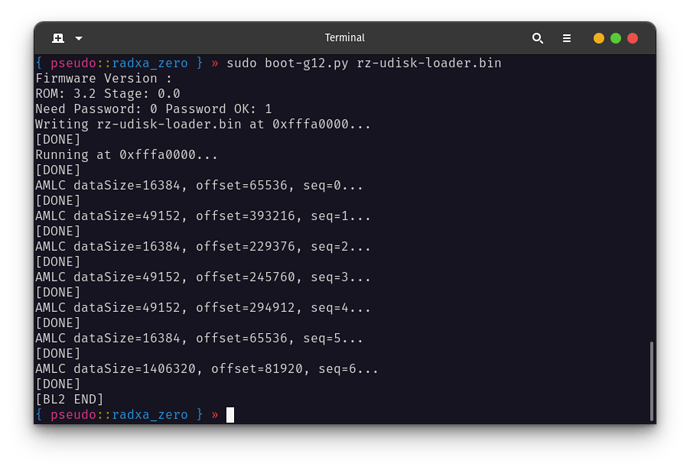 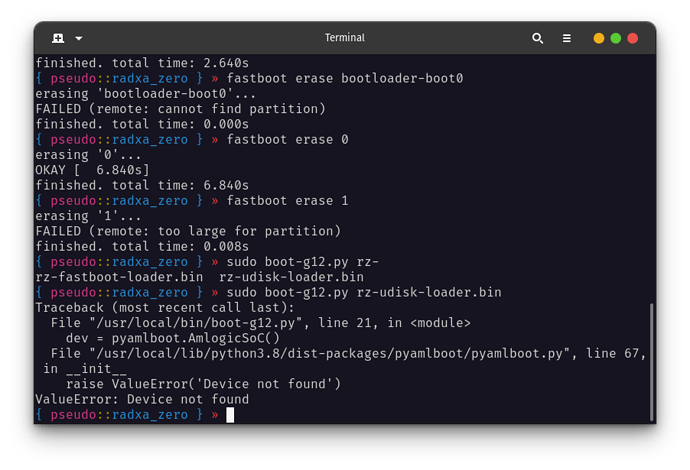 HOWEVER…for me, even after a successful loading of rz-udisk-loader.bin…the Zero did not show up as a USB Disk: 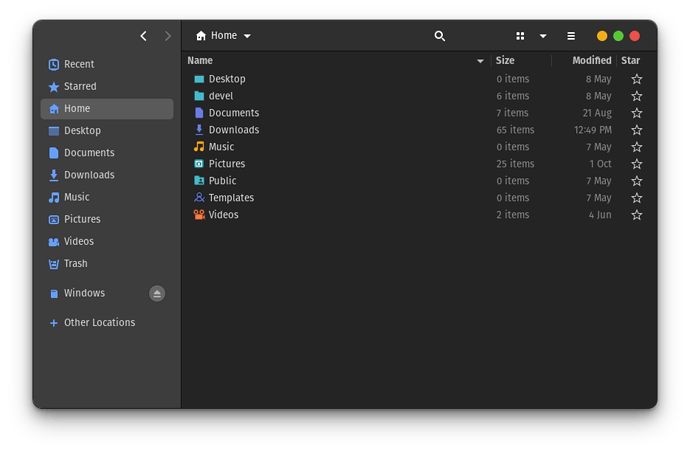 BUT…the default disks app did have the Zero appearing…and that is what matters: 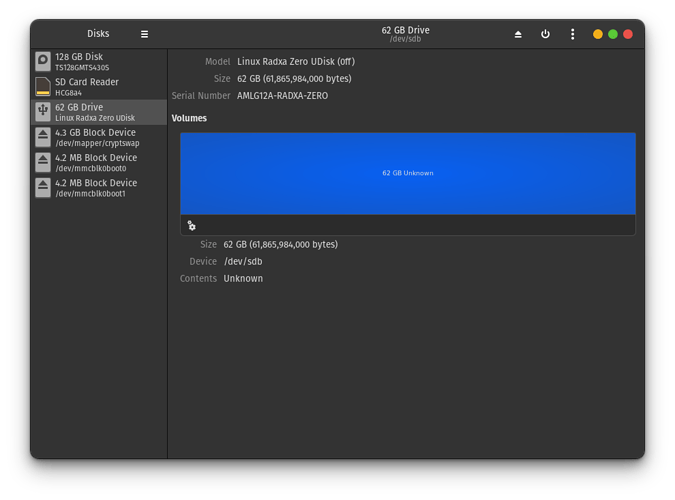 I would delete all the partitions to make a single block (as shown in the image above), then I’d select to restore disk from image: 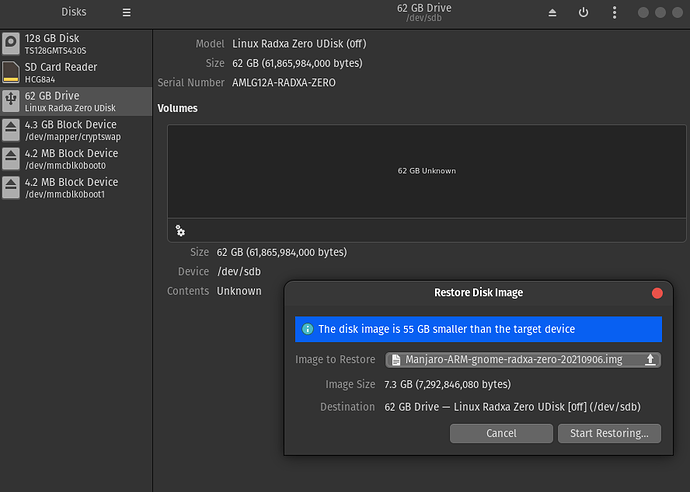 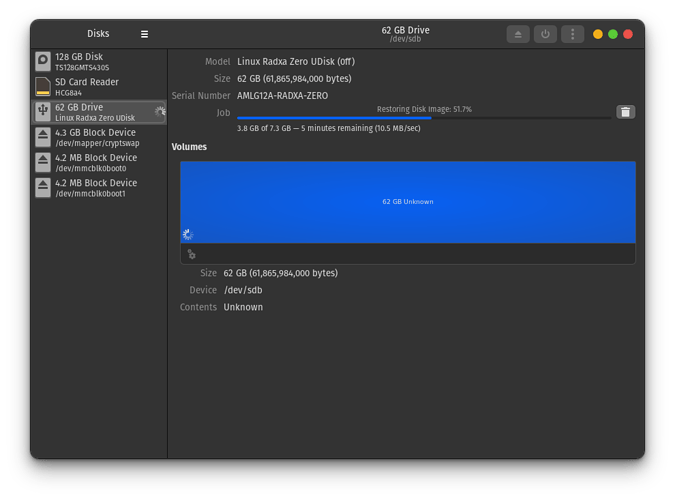 Once the re-imaging finished, I resized the partition to fit my version of the Zero (64GB): 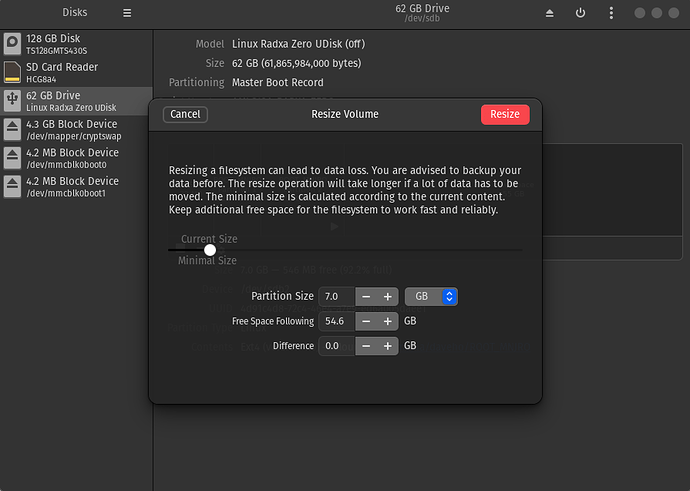 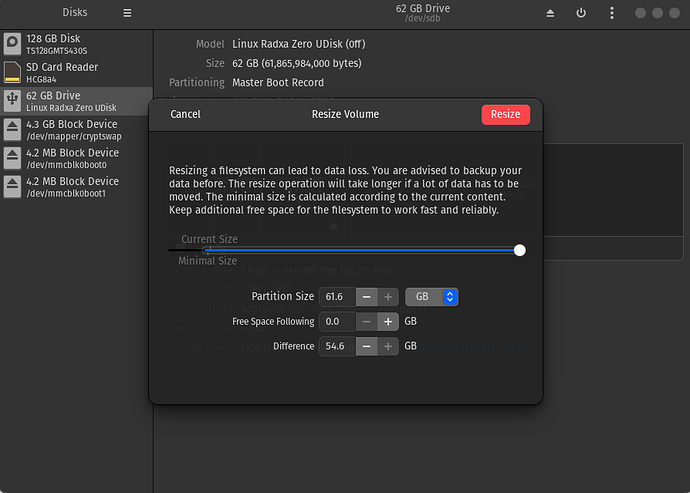 At this point, the device was finally detected and mounted as a USB disk in the file manager and it was mounted as /dev/sdb as you can see from the images above. The problem if you reset the Zero and attempt to boot from EMMC now, is that it doesn’t work. This is a common issue that many threads in the forum have outlined. The solution that I found here is to also write u-boot.bin to the Zero; so do not unplug the Zero at this point! instead…run sudo dd if=u-boot.bin of=/dev/<NAME> bs=512 seek=1 where <NAME> is the label of the Zero that your machine assigned when mounting the Zero as a USB Disk. (In my case, it was sdb as I mentioned earlier). 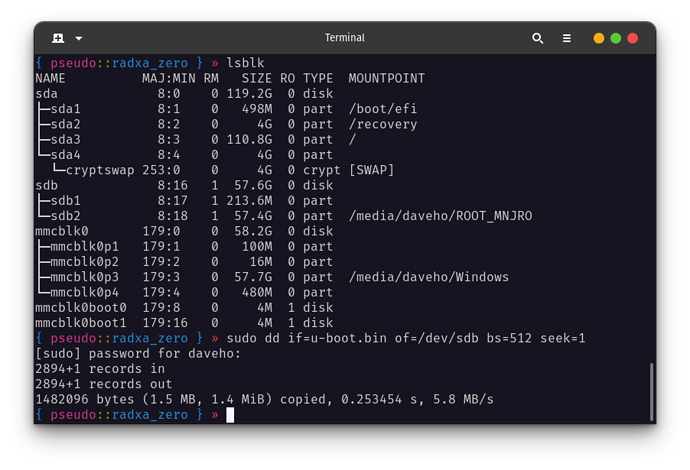 You should now have a Zero that is booting the distro of choice…(well, I’ve only tested with the Manjaro Gnome image, but I can’t imagine the others not working since the steps are all so similar…and these images are provided by Radxa themselves…so they would have to work if not for the outdated instructions provided…)

In any case, the missing piece was adding u-boot.bin back to the Zero to make it bootable. I’m sure for people more familiar with the matter that would have been obvious…but of course, there was no mention at all in the official instructions so I thought it would be finally worth sharing this here to support others who found themselves in a similar boat as I was in.