I think its clear for all those willing to see the RK3588 is the next big thing for sbc.
that leaves the question when are you bringing it to market?
( i am waiting to buy a new board)
and is there going to be better software support ? Cuz lets be honnest the rk3399 was a compleet disaster the gpu encode / decode / acelarated play of video / drivers is even currently only half baked in a lot of os systems still dont have it working some have half of it working despite a rather large amount of sbc using the rk3399.
IF the rock pi 5 is still in the design phase plz copy the layout of the ROCK 3A so the m2 nvme x2 slot is on the back and PLZ PUT THE SLOT IN THE RIGHT DIRECTION SO it dossent stick out at the wrong side and rais it 1 to 3 mm if you need clearence + makes the sbc a a lot more compact…the ribbon cable extenderboard makes no sence at all it only introduces more parts/points of failure and slower transfer since data needs to travel longer then direct mounting in the m2 slot…And if you think you gonna miss out most of us that buy a sbc have a set price in mind…if we have to spend 10 doller on a rather useless extension m2 card that means we will have to shave 10 doller of somewhere else…aka less ram…if you sell more boards with the higher ram on board you can get better bulk price for ur ram chips…

any update on the matter?

Have you ever thought M.2 SSD + connector is longer than the board?

its not i currently own a nano pi m4v2 (same demensions as rockpi and the m2 nvmez card fits perfectly within the demensions including the mounting bracked.

if you have a look at the layout you will see the m2 slot is mounted on the backside(rockpi 3A) and so it hes the full length availble.

2280 (22mm x 80mm) dimensions of nvme
the socket itsel is 5mm so thats 85 mm(with side mounting)
dimension rock pi 85mm x 54mm
even if side mounting was a no go for radaxa surely adding 2 to 3 mm to the length of the board would not be a issue?) iit seems rather dumb cuz if you mount a board on top of it thats bigger then the board itself you might aswell add 3 mm to the board and keep other positions the same to keep compactebillety

Yes this is true but it will be the same for rk3588 vpu support can take years if rockchip doesn’t officially open source the code.

There seem to be no logic behind your long rant.

I do agree that having pcie on outer direction is weird but there is no other solution.

Changing the layout coat a lot of money. They would go with the existing size else customer will have to pay more money.

id said keep the lay out add 2 to 3 mm to the length of the board .This dossent require a change of lay out at all just the m2 slot 2 to 3 mm back …So basicly add 2 or 3 mm empty board in the lengt for the slot (if you dont wanne do side mounting of the nvme).
here is the logic
doing so comes with sevral advantages:
1 direct m2 mounting or faster m2 transfer speeds/less points of failure
2 if current lay out is maintained and 2 to 3 mm i(empty with the exception of ther large m2 mounting socket)is addit in lengt it will protect the components based on what is now considerd the edge of the board.making a drop on its side less likely to do dmge the board.
3 Its better for the envirement it makes no sence to put natural resources in creating a aditinal board to put on top … when you dont have to…if you add 2 to 3 mm to lengt instead of wasting resources 4700 mm² of pcb +energy put in for creating the mounting system.
4 folks will gladly pay the 20 cents for the 2 or 3 mm since there board is now more capabel.
5 adding 2 to 3 mm wil remove the need for the external board meaning custumers can now go for more bang for the buck options like the bigger ram options.bang for the buck is what its add for sbc (would make rockpi more competitive vs raspbery pi) .
6 custummer satisfaction…How many folks did you think ordert the board have it deliverd to only find out on delivery the socket is on the wrong side?making them having to wait another 2 or 3 weeks (alliexpres) for the useles extension board.
7 overal perceptiën of the brand…they put on m2 mounting slot but in the wrong direction lol.

The GPU is the same as panfrost does not cover that series of GPU as the MESA reverse engineering starts once more.
Collabora & Alyssa Rosenzweig would probably very grateful of any early samples.

The Rock Pi 4 as its in the name was an attempt to as assimilate a ‘Pi’ format that really it fails unless exact to one of the formats.
If it fails then what is the point and why try? The Pi format itself might also fail for whatever might be a RaspberryPi5 as very likely they will have the same problems but doubt they will employ the strange off board solution.

It could be pico-itx format or whatever as its likely it will never mux pins or format exactly like any pi so why impose such strange implementations for the pci-e m.2?

first they pi format is not set in stone either…second adding 2 to 3 mm in length does not deserve to compare it with a micro atx since it bearly changes dimensions.furthermore i dont see the problem or the issue with adding 2 to 3 mm … since your not sticking to the pi format with the extension board itself either further more because of the already existing cases (that already take in acount the larger size of the extension board) there would notbe a true increase in width/length of the case and thus there for change nothing other then making height compacter.

and with side mounting i mean somthing like this: 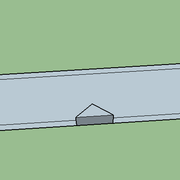 
that way there needs to be no screw at the end and that way it even fits in current format.
aldo i still think the normal mounting and just addin 2 to 3 mm in length would be better

alternative you could keep 2 versions 1 confirm at rockpi original demensions (with the extension board)and the rock 5 xL(xl standing for the 2 to 3 mm addit in length).that dossent need the extension board care to place a bed witch version would sell better?

That’s why we introduce the 3B form factor. Check Tom’s post.

ROCK 3B ideas and discussion Model 3B

Except the ROCK 3A with Rockchip, we have developed another RK3568 based SBC which we call it ROCK 3 Model B. ROCK 3B integrated some ideas we thought during the past years making SBCs. The PI-CO ITX form factor: We redefined the Pico ITX form factor mixed with the Pi form factor with the following benefit: All major ports are located at the same side(the rear side) Front side is for user interactive area such as power buttons, user keys, IR Board size is big enough for future expansion such …

the RK3568 is even a bit weeker then the rk3399 acording to sevral websites.+The mounting board hes a lot of stuff most folks wont need.requers 2 boards to function(so higher price aswell) and it is not 2 to 3 mm bigger its a lot bigger what is not needit the rock pi hes all things onboard that we want.except the nvme not directly mountable on the board.what makes no sence at all considering all it needs is 2 or 3mm more pcb.Make it rock pi and the rock 5 (with the rock having 2 to 3 mm exstra length so the nvme can be mounted.The die hard rock pi lovers can go go for there pi format and those working with a nvme can pick the rock 5 version and get more bang for the buck (since they dont need the useles m2 extender board).

Comparison between Rockchip RK3568 and Rockchip RK3588 with the specifications of the processors, the number of cores, threads, cache memory, also the performance in benchmark platforms such as Geekbench 4, Passmark, Cinebench or AnTuTu.

dont know why do

555555.png1003×237 7.97 KB
but we cant divert to far it was about the logic behind not increasing board size with 2 to 3 mm in order to make the board more compleet and more out of the box ready so folks can spend the mony they save of the expension board on more ram(aka bigger bang for the buck)i.
or splitting it up for die hard fans of the rock pi format m2 on extenxion board for the others who dont care about the board beining 2 or 3mm longer a m2 slot in the right direction so the nvme can be directly mounted on the sbc witouth the extender board with its lower speed /more points of failure
myusrn August 29, 2021, 8:01pm #15

What’s the chance that vnext sbc offering(s) would have a thunderbolt/usb4 port so one can use a single cable connection to modern monitor with thunderbolt for power in, dp-alt out and usb hub in will be possible?

Non as so far there isn’t a SoC that I know of that offers one part from Apple.

Its likely we could get low end GPUs working on Arm as true 64bit SoC’s are not like the very odd Raspberry method of a 32bit videocore bootloader and supervisor of cortex cores.
But not just GPU’s the cost, faff and extra’s needed even with m.2 is far more and much more restive than just normal PCIe cards.
It was an intel compute module I saw with a descrete GPU but yeah there SBC is also a PCIe card and you only need the mobo if you intend to use the PCIe.

Hopefully incomplete emulations of Raspberry Pi formats has ended, but recently I have been wondering if one edge of a SBC PCB should be a PCIe card interconnect.
It would allow a similar 180 degree adapter mobo so that any full size card can be used whilst being just fibreglass thickness cost.

Probably most people will choose to wait for the RK3588, after all, its performance is much better than the RK3568.

@ [myusrn]
both rock pi 4 as rock 3a both have ful hdmi port what more can you ask for.all things you need to hook it up are easely availble…anybody that hes a recent phone with some modern cpu wil have a power suply type c with enaugh juice/anybody you can visit most likly hes a hdmi cable plugged in to there tv set.so there you have your portable video collection.and high transfer speed external hdd.witouth the need to pocket a hub for thunderbold.
@ [XIVN1987]
I will wait for it …aswell …on my old rk3399 based on 28nm you could boil a egg with the more modern proces there will be less heat and since the new chip performce way better you could clock it down a bit further so you still get the equivelent of rk3399 but at lower temps …that way you can put in your pocket witouth having to put a heavy alluminium brick on it pulling your pants down

…i just wish they could stop the nonsense with the extender board for the nvme and add it to there main board make it more capable … it makes no sense to put the nvme slot in the wrong direction is all you have to do is make the board 2 to 3 mm longer.

SATA SSD is enough to me. NVMe SSD is better, but not necessary. After all, RK3358 is also only a mid-range processor, not Snapdragon 888 nor Intel i7.