What is safe temperature?

I run a compile job on all cores and using default blue heatsink temperature rised until 84°
Is this a safe temperature or should I add some fan ?

Yeah not been too impressed with that blue heat sink but putting on my glasses and peeling off the protective plastic film off the thermal pad helps a bit but actually strangely not all that much.
Also when you look at it it has x2 strips of thermal pad one thinner than the other so there is a correct orientation.
Still if you get both of those right its still a bit mweh.

I have put a small Sunon on the heat sink. Connected to the 5V of the GPIO pins. At 12V the Sunon is already very quiet, at 5V inaudible.
Although the fan only blows topdown the temperature stays below 60° at the same load.
I think this is healthier for the professor.

Actually I have just been testing and swapped out to my Rock5b that is similar with 12v fan on 5v so silent.
Since Radxa made the change so that the CPU shows 2400000 Mhz it runs much hotter than before.
temp-test.sh

Pretty sure when I 1st tested this before the cpu clock speed buff I was getting no where near these temps.
It hardly ever went above ambient temp and now that is totally not true.

It does help when you peel off the clear plastic protection!
But yeah the initial extremely cool running has been killed for extra Mhz.

Great package for fan control but sadly with cpu freq changes a 5v fan with the above sounds a bit like a mini vacuum as it struggles to stay below 50’c.

I did something similar for rockpi4 which worked fine that days.
I run two Penta-Sata-Towers (end of page) as NAS with armbian, but armbian has stopped support for DT-overlay of PWM-control, so had to go different way …

With aspect to fan-voltage: you could use a fan built for 5V, than pwm should work.

Its Radxa they have just completely killed the temps the SoC originally had to gain 2400000 Mhz, even the 40mm 12v fan on 5v on a 40mm heat sink is struggling to keep things cool.

That is with a fan approx 42% (12v on 5v) 40mmx11 heatsink, with the changes the blue passive hasn’t got a chance it will stay under the 85c throttling temp.

That is with the DeltaT of a not particularly warm UK room.
Yeah its an abnormal load but the cool running SoC it no longer is and I doubt your 60’c is the same as the running temps have definitely changed.

I don’t think it’s right to bash radxa now. If you follow the debug party, the overclockers were quite active there and if radxa gave in to them, then they went after the users with it.

It is a waste of resources to run a machine at its limit. No matter which one.

What do you think the fuel consumption looks like when you drive your car always full throttle?

I think with a better fan, the temperature could be lowered even further. My NAS with the rockpi4 are not heated by the CPU but the SSD heat. The CPU is mostly just bored.

I think the rockpi5 was not intended as a build server. Current PCs will certainly manage that better.

Therefore, the rockpi5 will probably idle for most users. From this point of view, the variant with the blue cooler is an acceptable compromise for the entry level.
If you want maximum performance from the small device, you have to create a suitable environment for it. It’s no difference for a PC. Otherwise, there would be no water cooling.

I am very satisfied with the performance of the little one
Its the software support that could still be improved.

P.S. recent AMD cpu runs at 90° intentionally. I thought, that must be insane, but it seems to be ok. Therefore I asked for what is sane tempterature for rockpi 5

85c is where it starts self throttling, but no max temp was published.
Radxa have completely killed the cool running that the SoC originally had that is just reality and no we shouldn’t need oversized cooling due overclocking because the SoC produces less than expected max frequencies.
Just back off the advertised spec and overclock an overlay or boot setting for OC but don’t do it this way round where the Coolers in the shop are no longer fully capable.
It needs to go back as it was and ignore the OC lot and if they want to OC then provide an overlay, but the heat increase for 6% performance just isn’t worth it.
Radxa should of guessed the 2.4Ghz Rockchip claimed was in that 10% grey area of absolute max.

According to the RK3588 datasheet Tjmax is at 125°C.
84°C can therefore be considered safe.

@grumpy
Thank you very much for that info!

So I’m perfectly fine with my 5V blower.

@stuartiannaylor
Just happened to read: You can lower the max frequency of the cores.
So instead of bashing radxa you could execute some (change the number to what ever fits your needs):

I moved the fan from topdown blowing to blowing from backside to front.
That way I could lower the temperature even more and nvme which was at 55° before stays now below 35° constantly. 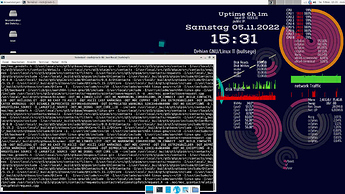 I thinks its just me as in Sept when the sun was blaring remember thinking this thing is running extremely cool and likely not even get to throttle at 85’c
Its now winter and definately much cooler but maybe I just never ran the full blown stress test for so long but the colder environment seems to of made no difference, which I thought would.

The opp tables seem the same as the old images so can not blame Radxa but could swear it seems to get hotter! Bemused

But the summer temps made no diff and the nvme adds a few watts. 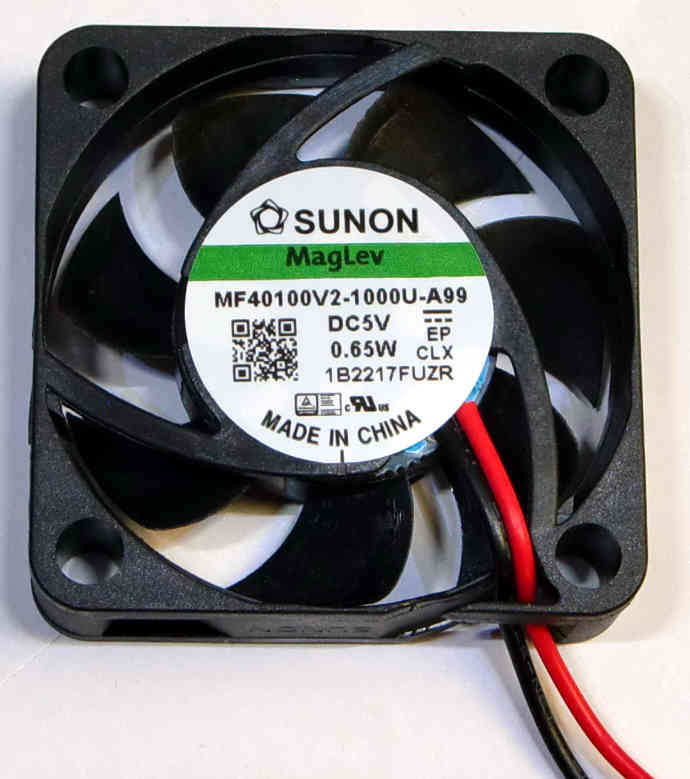 rockpi5_03.JPG690×779 37.8 KB
and changed fan-control software to support different fan profiles from file.
With the fan aside, … 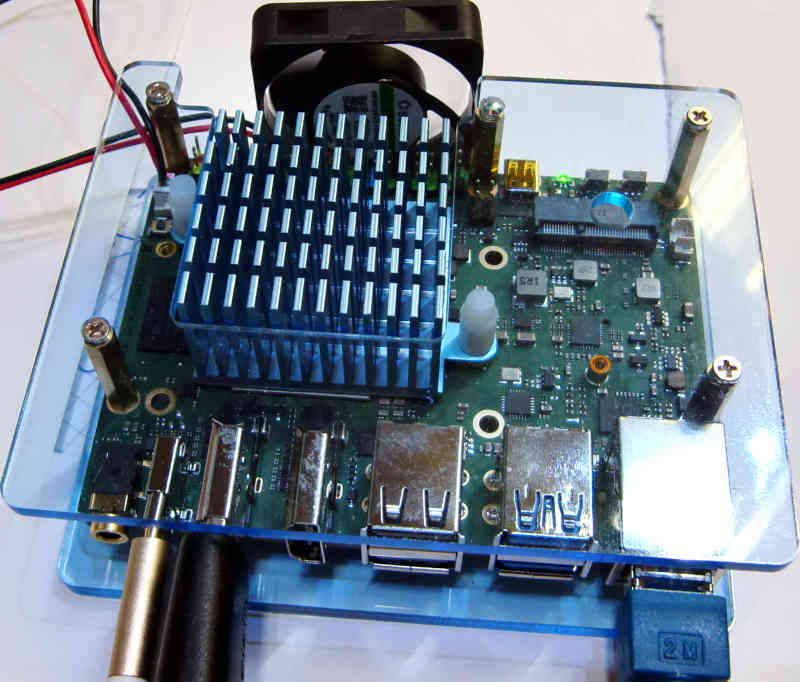 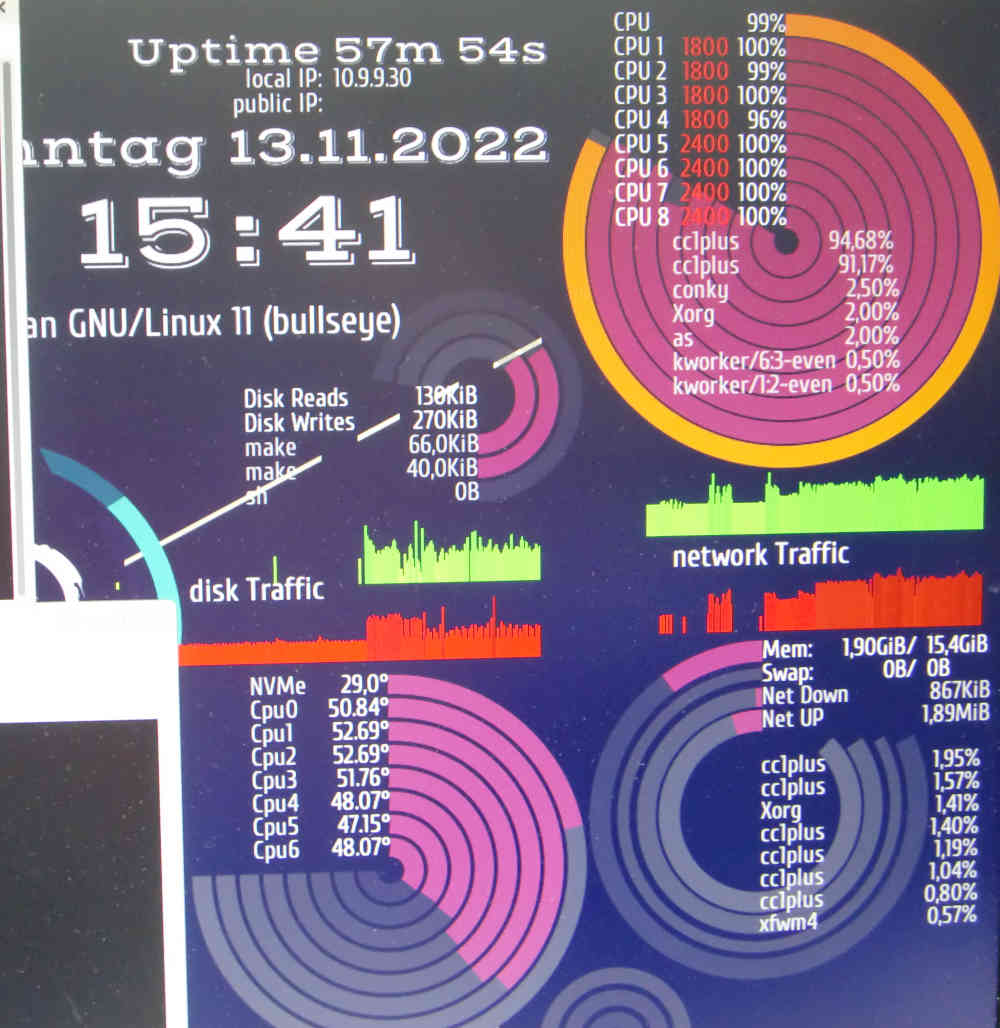 In case someone is interested in fan-control software, where temperature/fan profiles could be changed without recompiling software: my repo

I think fan should go on left hand side as you can blow right accross the length of the board. If I had a case thinking a push and pull config accross there would make a great thermal solution.

Brilliant that you have added control to /etc/

Prob because of the weird nature we are trying to control a voltage fan with pwm, we get this really bad fan curve where mark-space has little relevenace to fan speed.
Think I will just have it turn on if 10c above ambient and then if gets toasty > 70c set to 100%

I did already, but you replied, that the fan has wrong voltage.
For me, that heatsink apears similar to the recommended zalman heatsink, which apparently is out of stock everywhere.

I tested topdown blowing too. Keeps processor cool, but does not cool the nvme. A side blower keeps nmve cool as well.