I have to keep the fan running at full speed to do the overclocking, which is very noisy. I don’t have a powermeter so I don’t know about the power consumption, but it can be inferred from the temperature: 60°C with full speed running fan is too high. But for my low pvtm value, microvolt 1.05v can let my board reach 2.4GHz, which is valuable to me.

A little concern after having played around with DT overlays and overvolting: my board now consumes significantly more than before even without any DT overlay loaded or other DT manipulations.

@willy: have you already done some tests here? Since you’re able to measure maybe it’s a good idea to check consumption prior to any such tests and then compare.

Since I made only reboots all the time I disconnected it now from power for an hour but still same symptom: significantly higher idle consumption. Also the upthreshold=20 trick doesn’t work any more since now DRAM is all the time at 2112 MHz and not 528 MHz as before (having this already taken into account and measured with powersave dmc governor as well).

Maybe I’m just overlooking something but thought I write this as a little warning so others can measure before/after conducting any overvolting tests.

I think your extra consumption simply comes from the DMC running at full speed (for whatever reason), that’s the same difference of ~600mW you measured last month.

It does indeed happen to fry chips with voltage increases, but not by such small values. You’re definitely safe below the “absolute maximum ratings”, which usually are much higher because they don’t depend on temperature but the process node and technology used that impose hard limits on the voltage across a transistor, even in idle. I don’t know the value here but it might well be 1.5V or so. Regardless I’ve sometimes operated machines above the abs max ratings… But the gains on modern technologies are fairly limited, we’re not dealing with 486s anymore.

With that said, no I haven’t been running frequency tests yet (by pure lack of time, not curiosity). And yes, that’s definitely something for which I’ll watch the wattmeter. I’m even thinking that it could be nice to observe the total energy used by the test and compare it with the test duration. Usually the ratios are totally discouraging

that’s the same difference of ~600mW you measured last month.

Last week I measured 1280mW in idle, now it’s 1460mW. DMC not involved since switched to powersave before:

And as reported the upthreshold behaviour now differs since with 20 DRAM is at 2112 MHz all the time while it was at 528 MHz last week. This then still adds another ~600mW…

did you happen to change the kernel maybe since previous measurements ?

It was just a change in settings I had forgotten and the TL;DR version is as simple as this:

Setting /sys/sys/module/pcie_aspm/parameters/policy to either default or performance makes no significant difference. The consumption delta is always compared to powersave (5.10 BSP kernel default).

Seems neither kernel nor bootloader related. I had a bunch of userland packages also updated but then remembered that silly me recently adjusted relevant settings. Since I started over with a freshly built Ubuntu 20.04 Armbian image (to be able to directly compare with Radxa’s) I had tweaks missing for some time:

And yesterday I applied these settings again and then the numbers differed.

With ASPM set to powersave (the kernel default) I’m measuring the 3rd time: idle consumption: 1220mW (which hints at 1220-1250mW being a range of expected results variation. For the lower numbers: I’ve three RPi USB-C power bricks lying around and am using most probably now a different one than before).

Then retesting with /sys/devices/platform/dmc/devfreq/dmc/governor = powersave to ensure DRAM keeps clocked at 528 MHz: 1470mW, 1460mW and 1470mW.

Setting upthreshold = 20 ends up way too often with DRAM at 2112 MHz instead of 528 MHz as such I slightly increased upthreshold in my setup. Though need to get a quality M.2 SSD I can use for further tests. Right now every SSD that is not crappy is either in use somewhere else or a few hundred km away.

Cool that you found it! I remember that we’ve noted quite a number of times already that ASPM made a significant difference in power usage. This one is particularly important, maybe in part because the board features several lanes of PCIe 3.0, making it more visible than older boards with fewer, slower lanes.

This one is particularly important, maybe in part because the board features several lanes of PCIe 3.0

Yeah, but until now I’ve not connected any PCIe device to any of the M.2 slots. So I really need to get a good SSD to test with since judging by reports from ODROID forum idle consumption once an NVMe SSD has been slapped into the M.2 slot rises to insane levels with RK’s BSP kernel (should be 4.19 over there, unfortunately users only sometimes post the relevant details).

Could be an indication that there are driver/settings issues with NVMe’s APST (Autonomous Power State Transition) asides ASPM.

If I can manage to arrange some time for this this week-end, I could run some tests with ASPM. I’m having M2->PCIE adapters and an M2 WIFI card, that should be sufficient.

Testing LVGL on Rock 5B. 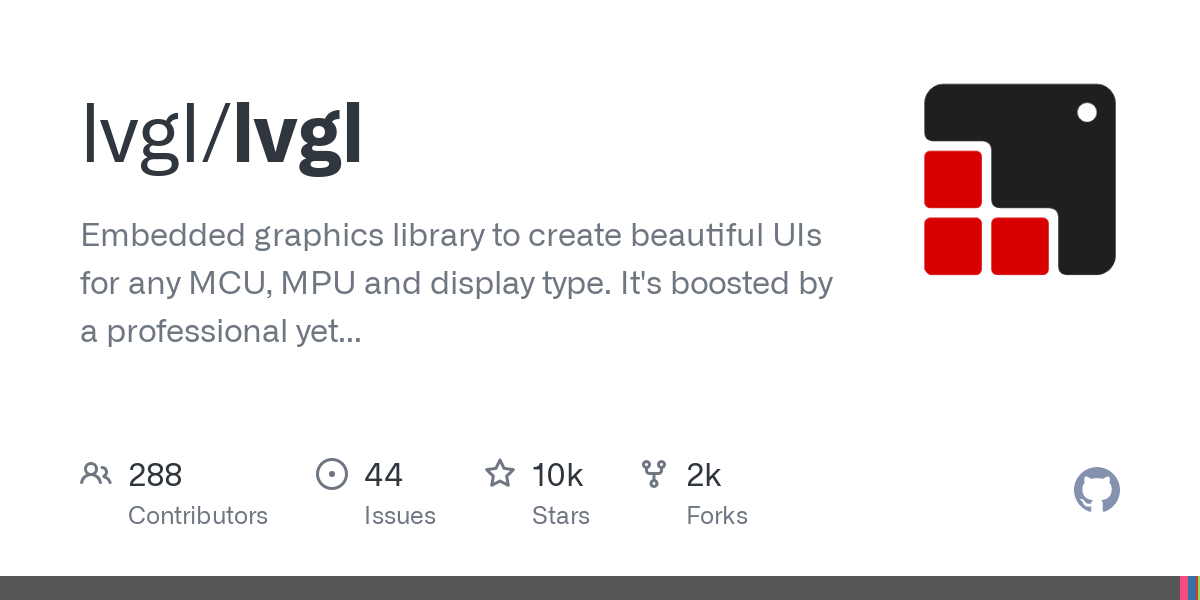 Embedded graphics library to create beautiful UIs for any MCU, MPU and display type. It's boosted by a professional yet affordable drag and drop UI editor, called SquareLine Studio. - GitHub - ...

Before you build you should enable, disable or change some settings:

Tested with HDMI 1920x1080 and debug info. There is also a Wayland driver that may be a lot faster but as i don’t have Wayland i have not tested it. 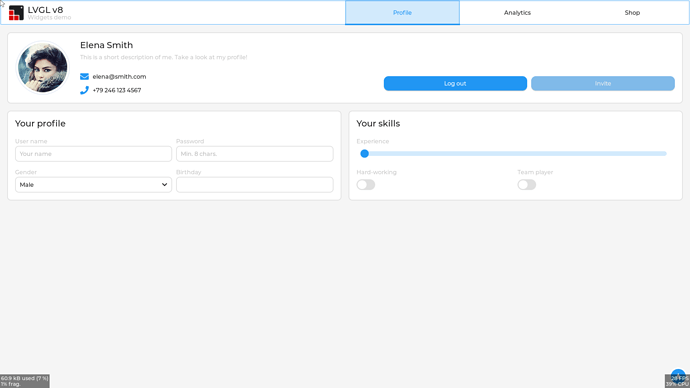 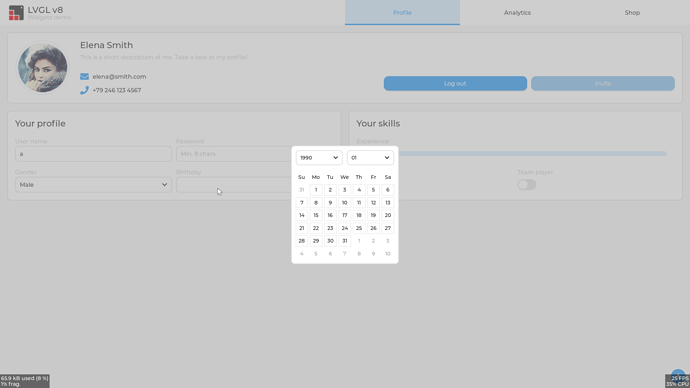 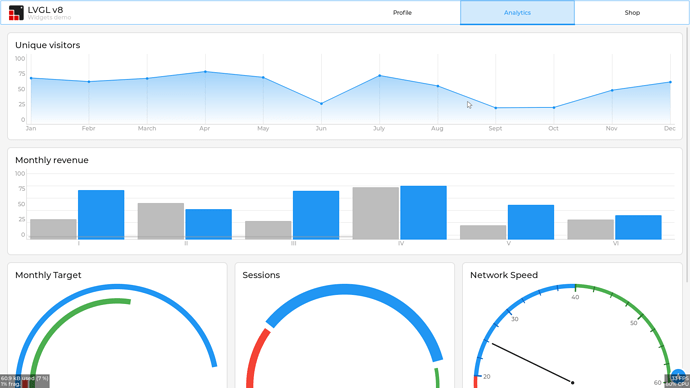 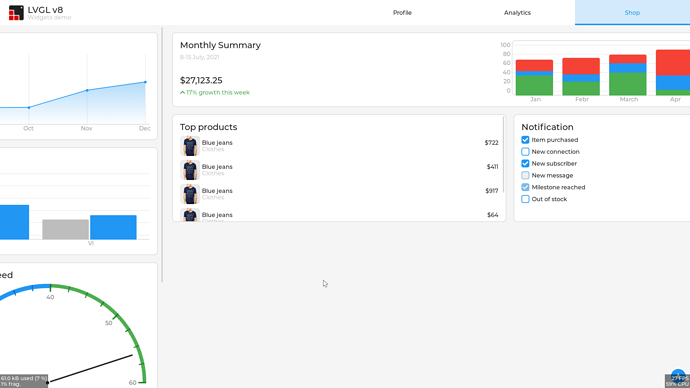 Panfrost now almost works well enough that you might want to use it:

The current code is in the csf branch of https://gitlab.com/panfork/mesa/.

Great work! Besides, is there any score comparison between arm blob driver?

There’s not much point in doing that yet… currently I wait for the GPU to power off between each frame so there’s an overhead of a few milliseconds each frame, so benchmarks will always be a lot worse. I think the blob is at least five times faster for things like glmark at the moment.

In terms of stability, it’s getting a lot better, and just a few minutes ago I fixed a bug with importing shared buffers, so now Weston, Sway and Mutter all work, and even Xwayland with acceleration can work to a degree, which the blob can’t do.

Also recently fixed is support for using the blob for clients when the compositor is using Panfrost, for non-wlroots compositors. This means that you can have (or will have, once I fix a few more issues) all the performance of the blob for Wayland GLES applications, but X11 can still be accelerated!

A few horrendous hacks later, and SuperTuxKart now runs, even with the fancy GLES3 renderer!

Which driver will win the race?

(Answer: They both run badly, because the real bottleneck is Weston’s screen capture. Maybe Sway+wf-recorder would work better, except that the blob doesn’t work with it unless I do some patching.)

Does this work with mainline kernel or do we still need Rockchip BSP?

@icecream95 Do you have kernel repo somewhere so everybody can try?

Any timeline for mainlining mesa and kernel part ?

It uses kbase, as panfrost.ko doesn’t yet have any code for firmware loading and the like. So the driver will not work with mainline. Running an out-of-tree kbase module on top of mainline might work, but then you have to work out how to fix the power management bits to get the GPU to actually power on.

That’s unfortunate, as I have found kbase to be a very broken kernel driver, at least when misused as I do… stack corruption, NULL dereferences, undefined instruction faults, spurious MMU faults causing CPU lockup, accessing user memory when it shouldn’t, etc. etc. etc. It really needs a rewrite in Rust!
I think at least some of the bugs were added by Rockchip, though.

I have made no changes to the kernel that are actually required, the “5.10” BSP kernel should be good enough.

It will probably be a long while before anything is upstreamed, don’t hold your breath.

Actually, it appears that rockchip-drm is causing problems at least as often as kbase… I wonder why my kernel is so unreliable, there shouldn’t be too many changes from the Radxa repository.

For example, here’s a bug message I got without using the GPU at all:

I could finally run a quick test with/without ASPM here. So I’ve plugged this WiFi card on it:

The whole board consumes 1.735W with aspm/policy=powersave, and 2.062W with performance, or 328mW difference.

I don’t know if the savings are on the controller side, the device side, or both. I suspect that they’re both though, at least because it could allow to stop the PCIe clock.