I am sorry that the coupon is only available for current two distributors, Allnet and Ameridroid […]

Thanks for the quick clarification! Let’s hope that there will be coupons for early adopters of future models in the EU as well, then…

I think in August we can ship the first batch of order.

This is still good schedule, we should have devices shipped before christmas

I am sorry that the coupon is only available for current two distributors, Allnet and Ameridroid and the coupon will not be available soon once we start shipping. The already bought coupon is available in one year.

We got july now so I hope there will be announcement about this EU shop, hopefully much better than pine64.eu which has only one sbc now and site looks poor. I saw that Allnet restocked some rock pis, so probably there is another batch of them comming to that EU store.
BTW: yestarday annonced pi was sold in about 5 hours at most of distributors.

https://coolcomponents.co.uk/products/raspberry-pi-pico-w you can still get if that is what you mean or did I miss a new product?

I would rather go for some esp32 for such product.
Sure some stores could get more of them - I checked those near and all sold everything on first day

I hope that radxa new eu shop will get reasonable amounts

Is PoE capability planned for this board?

Radxa’s most recent OS images are here: https://github.com/radxa/debos-radxa/releases (two months ahead of where we should look at).

The eMMC has a compatible pin-out at least with Hardkernel and Pine64 (the second row of pins is just for better connection w/o any signals/power) so flashing one of these images with an eMMC-to-SD-card adapter was an easy one.

At least the rock-5b-ubuntu-focal-server-arm64-20220701-0826-gpt.img image has SSH enabled, fetches an IP address via DHCP and is good to go without connecting any display/peripherals except network:

Rock5B (and of course other RK3588 thingies) are so far the fastest SBC around (competition). And when comparing performance/watts most probably also the most power efficient (TBC).

Was Radxa ROCK 5A a typo?

I received mine as well and couldn’t resist running a few tests.

Mine is configured to top at 2.304 GHz, I don’t know how Thomas got 2.400 in his tests. I noticed that the two A76 clusters don’t run at exactly the same frequency, cores 4 and 5 are reported as running at 2286-2290 MHz while cores 6 and 7 are measured at 2308 MHz. I suspect that something is disturbing cores 4-5 or maybe it’s someting internal, but quite frankly that’s a minor detail.

I could measure inter-core latency for atomic operations. It’s overall uniform across the 8 cores because they all share the same L3 cache, which is great. The values are excellent (27-28ns for R/O accesses, 56ns for A55 to anything, 67ns for A76-A76) and much better than the last Xeons I tested.

I have also run my usual build test. The build times are the shortest I’ve seen to date on this test, x86 included, and they’re twice as fast as the Odroid-N2+ at 2.4 GHz, which was the previous winner ( http://wiki.ant-computing.com/Choosing_a_processor_for_a_build_farm ).

As Thomas also noticed, the memory performance is excellent, and definitely participates to the very high build speed (since gcc is extremely sensitive to both latency and bandwidth). Having 4 channels very likely maintains low latencies even when all cores are loaded.

I also noticed that an extlinux.conf is used to pass the kernel parameters. Thanks for that! It’s so much easier than having to figure how to fiddle with a boot_param variable in a u-boot environment!

Oh and by the way, the board doesn’t particularly heat up during build sessions, so it seems like great components were chosen.

I noticed two small problems on the hardware layout though, that were already suspected from the photos. The holes for the heat sink not being centered around the SoC make it almost not touch the SoC (I’ll try to upload photos). This can certainly be arranged by placing something as high as the SoC at the opposite side. The second problem is the location of the heat shink hole that goes directly under the M.2 location. The plastic part is particularly high and I think it will cause trouble with some M.2 boards, though with flat screws it shouldn’t be a problem. 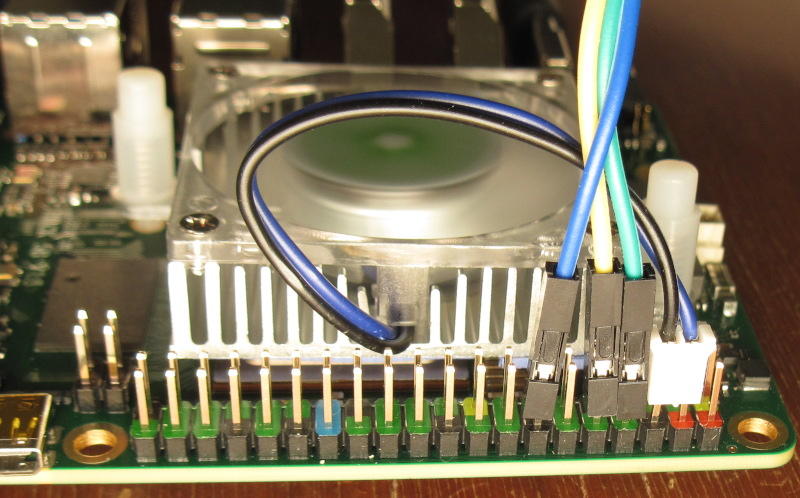 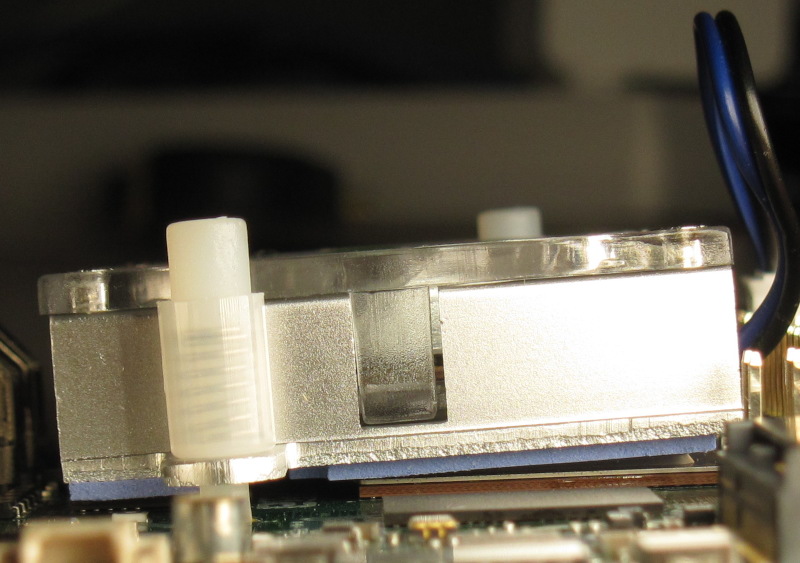 From top to bottom:

Wow that must be running cool if the heatsink is like that, but can not see it ever lying flat if its so far off centre?
If it does run so cool would they not be better reverting to the original smaller heatsink that also doesn’t protrude under the m.2?
PS the heat sink looks extremely close to the 1st row of gpio also.

And here comes a photo of the heat sink from my thermal IR camera under the exact same angle as above, with the fan unplugged during build loops (otherwise the temperature doesn’t raise in a relevant way).

We can see roughly 3 degrees difference between the SoC and the aluminum. Note that the measurement lacks accuracy due to using a small sensor, but it gives an idea. Overall it’s not bad at all, but definitely something that could be improved a bit 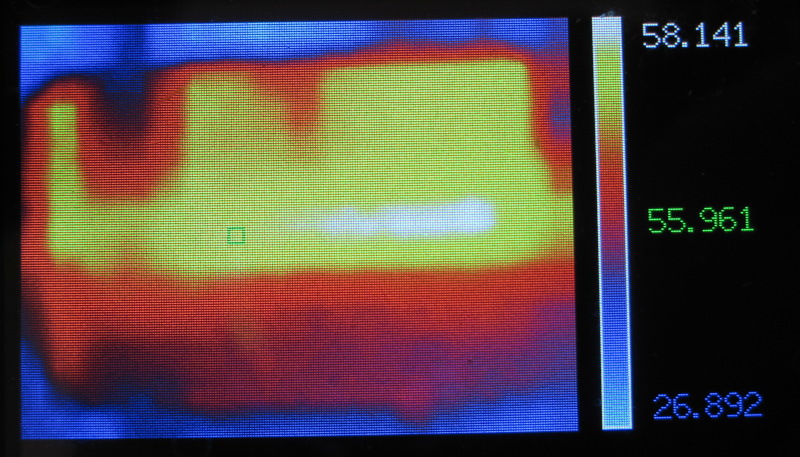 I think that by just adding a small washer or riser close to the HDMI connectors it will be sufficient. Also regarding the size of the plastic fixation, I don’t know what should be the final thermal solution, but if it’s just a heat sink, then there will likely be a flat screw on the other side and this shouldn’t be an issue. I’m bringing all observations here so that we don’t miss anything, but it doesn’t mean that I’m seeing serious problems at all.

You are right, things are generally improved by changing the thermal pad for a more efficient one.

Seriously, when I see the benchmark, I think this thing should take a place in a HDD/Pico-Itx slot of my Helios64,
instead of all that, I think it’s a sign that this card isn’t ready yet,
and it would be a disservice this SOC to fixed us on something so visible and previsible.
considering the location of the holes, I have no idea how Radxa is going to put the keel

I look forward to reading you for the rest !

“the supplied fansink is noisy/annoying but a) it does its job and b) Radxa will come up with something else for regular consumers (at least I hope so).”

Yes, for the developer edition, we just grabbed some heatsink/fan from Starfive VisionFive, the connector doesn’t even match the PWM fan header on the 5b board.

I don’t think its the fan that is the real problem in the long run, as if you draw a diagonal from the mounting holes that is where the pressure point and fulcrum will be. You could be offset a little, but when so far and crossing the very corner of the raised part of the cpu its going to do what its doing and at the least compression is going to be uneven.
Seems a little back to school with fulcrums and levers and Mr Archimedes…

I can understand why as there is very little room elsewhere but with the cpu shifting up that diagonal style mount isn’t going to be a great solution as the CPU on the board has moved up the board since the 1st revision.
Its a square peg and 2 round holes to me and can see why as there isn’t a whole lot of space for anywhere else and maybe it will have to be the spider type that presses down from mounted pillars on the normal board mounts.
Pretty sure you can find a better fan but also the fan connector is PWM so on 5v its going 100%?

That was my expectation as well, but thanks for confirming. I’ll eventually try to run some tests with various heat sinks.

I’ll try with diverse heat sinks, I have plenty here.

Regarding power usage, here’s what I’m seeing, powered from 5V: 1.6W idle, 8.6W during a compilation, add one watt for the fan.

I also started it with a USB-C power block that I’m using for my laptop at home, and it boots fine but at the end of the boot sequence the machine stops and restarts. I’m suspecting it could have something to do with OTG initialization that might possibly cause the board to stop requesting power for a short instant, but I could of course be wrong. I’ll eventually try with other PSUs.