is it compatible with Rock 5A? I have tested this feature with a M.2 E key to PCIe x1 converter, followed by a 20 port sata card. This works with Debian 11, but it doesn’t work with Manjaro:

Howto enable PCI-E on the Rockpi3A M2. E_key? Model 3A

I have downloaded the debian image from here. [1] That image works fine. When I have access to the machine again, I’ll post the dmesg and the kernel version, and some benchmarks [1] https://github.com/radxa-build/rock-3a/releases/tag/20221101-0101

Are there any chances for m.2 splitter for Rock5B? Some cards uses 2x or 1x pcie lane, should be easy to split that to 2x2 or 4x1

Are there any chances for m.2 splitter

i would like that as well. I would like to split the M.2 M-key PCI-e x2 port of the RockPi3A into 2 separate PCI express 3x1 slots, so I can connect a nvme SSD on one PCI-e lane, and a 2.5 Gb or faster network card to the other lane. The bandwidth of a single PCI-e 3 lane is 0.985 GB/s, so it’s almost possible to run a 10Gbit network card at full speed on that.

Does the kernel understand such splitting?
Does Aliexpress sell such splitters?

Does the kernel understand such splitting?
Does Aliexpress sell such splitters?

As we discussed here soc supports that and it should be possible to split into 2+2 as well as further splitting into 1x lanes. There are many such pcie cards for 8x slots, I found only one or two for pcie 4x and none for m.2 slot. For now to test that You would need m.2 to pcie adapter: 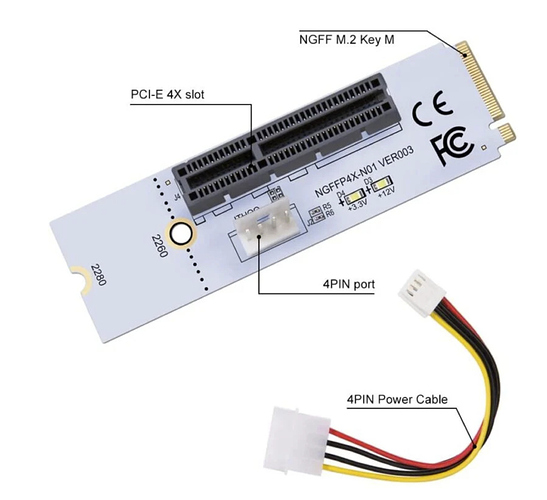 and then bifurcation adapter: 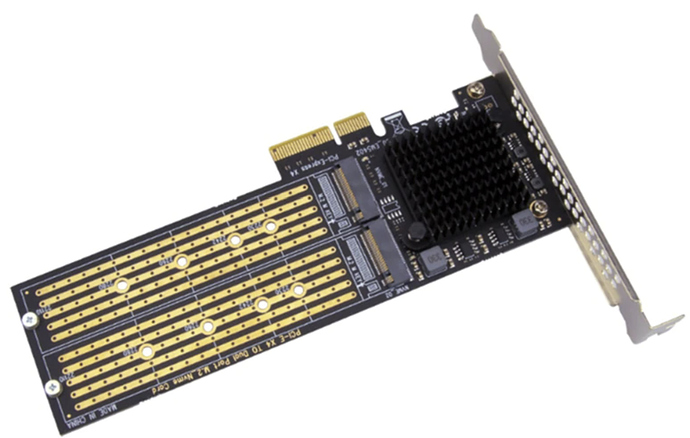 and probably some ribbon cable or insert that on rock 5B.

The main problem here is that pcie 4x bifurcation adapters are not popular, usually people splits 8x and 16x pcie. Here we fight for each pcie lane and would need something small from m.2 to 2x/3x/4x m.2. The best compact adapter was the one made for khadas vims: 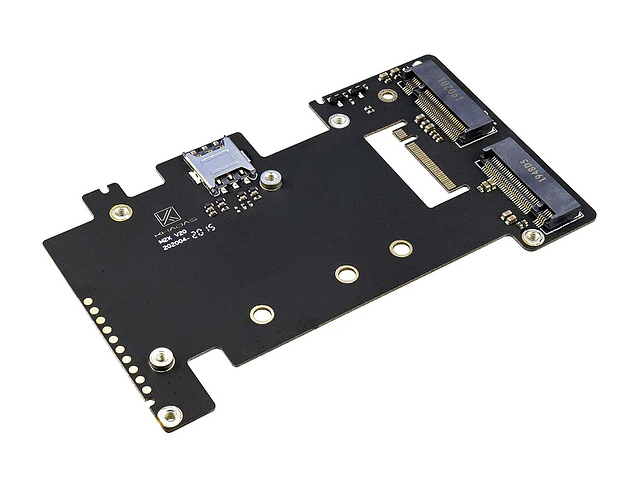 or the one on ribbon: 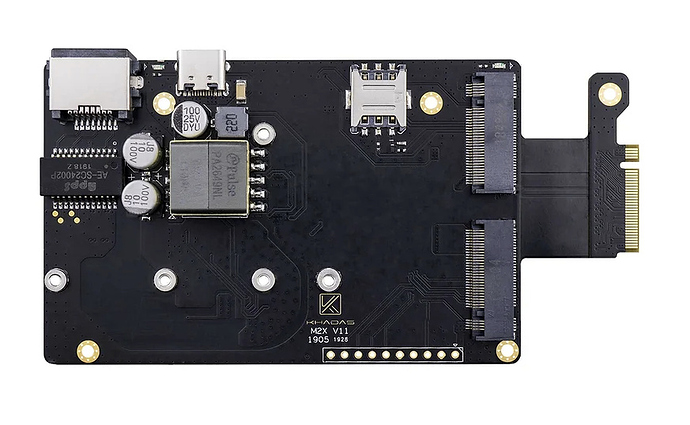 they both are fitr perfectly on small khadas board, and they are very cheap. The one without ribbon is so simple that it slides into m.2 and gives two m.2 ports (of course it basically just extends signals from them, and it’s 1x pcie 2.0 AFAIR).

Also I found out that there are many very cheap splitters on pcie 8x.
This card is about $20 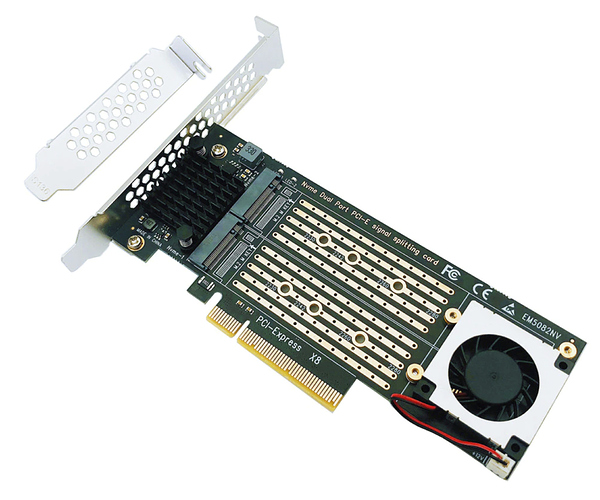 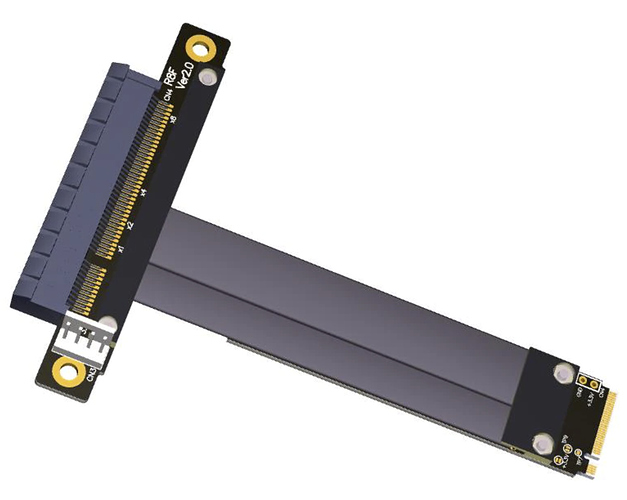 (or by just drilling limiter on side of 4x slot),
but don’t know how this will work - slower or only one slot.

I made a little PCB which splits the x4 Lanes into 2x2: 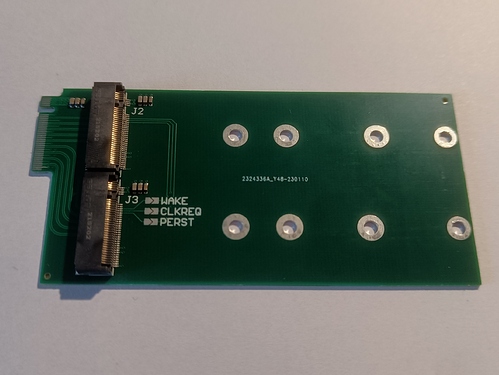 IMG20230127140838.jpg2644×1983 510 KB
I haven’t tested it yet. I ordered the wrong thickness (should be .8mm, is 1.0mm) and i still need to find out how to modify the PCI-E configuration in Linux. I’m still not sure what to do with the signals wake, clkreq and perst because they only exist once on the Radax M.2 port. The pins on the RK3588 intended for this signals for the second PCE-E port are already used otherwise
In the end it should look something like this: 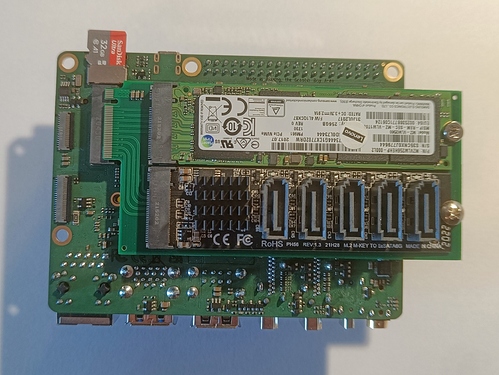 The second one is totally worth its money, for m.2 to x16 slot

I use this 15€ one for my nas-build with
SATA controller: JMicron Technology Corp. JMB58x AHCI SATA controller
for a month without any problems so far. 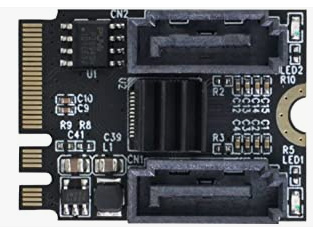