I have the M.2 extender, the heat sink, and a uSD to eMMC adapter.

This v1.6 Rock Pi 4B+ has a small eMMC module already bundled on it, with Twister OS installed there. It was booting just fine (off the eMMC). On a separate PC, I wrote the
Armbian_21.05.1_Rockpi-4b_buster_current_5.10.35_xfce_desktop.img
image to an NVME SSD and confirmed that a lsblk command on the RockPI showed the NVME. All was good.

The instructions at Rockpi4/install/NVME - Radxa Wiki clearly state that I need to remove the eMMC module to boot off the NVME. I popped the eMMC module off the board, and where I was expecting to see 2 eMMC connectors/socket/rails (like on the v 1.4 board), I instead see some glue and a scattering of little round contacts/solder balls. Where are the eMMC connectors/rails?

Now, even with the NVME in place, it won’t boot – and I can’t get the eMMC module back on tightly. It seems like that included eMMC module was really not meant to come off the board? Power gets to the board - the green light comes on - but then nothing. No blinking blue light. Nothing. Can I recover this? I have no issue with not using an eMMC.

thanks in advance for any help

I popped the eMMC module off the board

Can you post a picture? You mean you pull off the chip?

Hello Jack.
Thanks for your reply. Here it is: 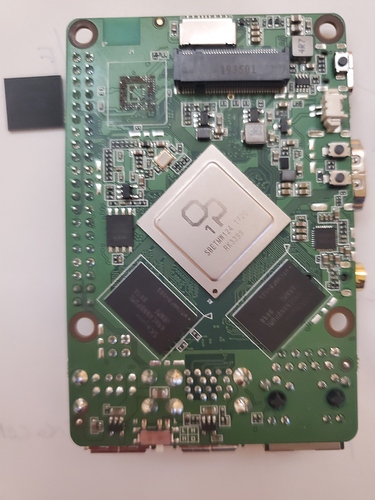 It seems (from browsing the incoming problems) as if Radxa should perhaps reconsider their choice to make the eMMC permanent on the new B+, and revert back to a removable and replaceable (and interchangeable) eMMC.

And I’ll admit that pulling that attached (soldered on?) eMMC chip from the board was pretty dumb.
However, before today I had never seen, much less removed, an eMMC chip. I am a long-time s/w guy.

I didn’t know these forums existed previously, and had I crawled around in them enough I would have eventually figured out that the chip was permanent. But you have to admit the official doc/wiki is seriously lacking (to say the least). There is no mention anywhere (that I can find) of the differences in the 1.6 4b+ board. Would you not agree (I’m honestly not griping at you, just asking your opinion) that making a chip that was previously removable suddenly non-removable is kind of a big change? Is it really that difficult to document that somewhere in the official wiki, particularly in the parts where it says to remove the eMMC module?

This is great hardware, and I really want to use it for my projects.

Can anyone please tell me if this 4B+ 1.6 board will boot in any shape or form w/o that permanent eMMC chip? Or should I just throw it in the trash?

I saw another post here about putting 2.02 Armbian on a microSD, pressing a MaskRom button, and booting w/o the eMMC. Will that work with this model 4B+? I can live w/o eMMC. The fact that the chip is permanently attached makes me think it has to be there for anything to work… Is the SPI on the eMMC?

Try to boot the system from the micro SD card with pins 23 and 25 shorted.

woow dude that was crazy lol. But… if I were you, I would go to a phone repair store since they have the tools to clean that spot (and see if is not damaged) where it was the eMMC, and if you are lucky, maybe you can buy a eMMC and ask some technician to solder it for you. Ask for radxa team if it is possible to do that with other eMMC.

Show a picture of the bottom side of the eMMC to see if it is too damaged.

I have to say, very impressive. I don’t know how you manage to do that. We have to heat it higher than 250 degree to remove it

The hw difference can be found here:
https://wiki.radxa.com/Rockpi4/hardware/revision

With no eMMC board now you can still boot from SPI and put the OS in NVMe.

That does hurt to see. But with some cleanup so no shorts are made it can still be used without eMMC.
I think you’re the one from reddit I answered.
If not, then multiple popl are pulling of their soldered eMMC modules.

I still prefer pluggable modules, except for lower tier boards.

I’m not in reddit, it should be the same nickname

I’m not in reddit, it should be the same nickname

It replied to the wrong person. @dbaman is probably the one I talked to on reddit.

I am happy (and relieved) to report that, even after stupidly ripping off the permanent eMMC module on this Rock Pi 4B+ v1.6, it still works. I have the heatsink, M.2 extender, and a booting 1TB nvme SSD (a 1TB XPG) all working happily after I followed the instructions at
Booting ROCK Pi 4(A/B/C) with mainline u-boot in SPI, NVMe and Armbian v20.11.x - Rockchip 3399 - Armbian forum

I think this demonstrates the quality of the hardware on this Rock Pi… Good stuff.

Now to have a look at Armbian…