How to use panfrost for mali-t860

Just use Armbian where all this works out of the box.

glxinfo | grep Mesa to see if its installed.

Thats it nothing special needed unless your running xcfe which needs tweaks as starts things in a weird and slow graphics mode.

Thats it nothing special

Are you sure this will works on https://github.com/radxa/rock-pi-images-released/releases

Probably not as the kernels are antiquated. You should have 5.10 as minimum with the Panfrost drivers.

Thats all you need, why radxa run with such old kernels is a mystery to me but hey.

Thats all you need, why radxa run with such old kernels is a mystery to me but hey.

This is what they get from Rockchip and this frozen kernels is much cheaper to maintain (for them) and support since nobody is messing up with the code and most of the things works. Having mainline in the same condition is a lot more troublesome no matter what, even all functions would be covered. Right now, someone fuc* up eMMC support on RK3399 - I just notice two reports from different vendors, didn’t check what is going on and not sure if Rockpi 4 is affected.

Dunno I got Mesa running as an early adopter of the Pi4 and it was a long wait, it was about 5.11 think I got rid and sold on ebay.
There where alternative images and kernels frequently flying around or use Armbian like you say, they are going to have to do something soon or have product running on kernels past EOL.
4.4 seems like a lifetime ago.

The panfrost kernel driver is available in 5.10 but there are enough fixes and improvements in recent kernels that I’d suggest running something newer, or backporting the fixes onto 5.10. On the mesa side you need to be runing the latest official release. It works well. Panfrost Midguard support was mostly written on an RK3399/T860 equipped Chromebook

Yeah 5.10 minimum as an alternative to Armbian if you have the pi4-b/c Manjaro being Arch Linux based is a rolling release and a fave of mine. 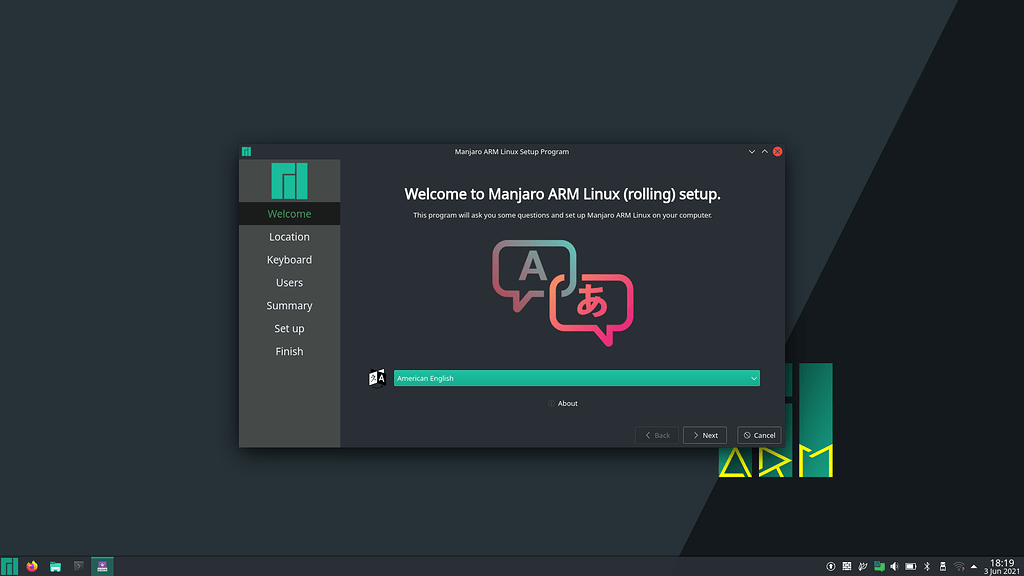 I have only been playing with the Zero of late but the latest Mesa drivers do provide quite a decent performance increase that will be part of a rolling release like Manjaro that are always relatively recent.

I am a big arch fan and the majaro minimal images are also great headless versions also.
https://manjaro.org/download/#rock-pi-4b-minimal

Hoping @spikerguy might update a few for the zero as would like the minimal version as it does make a really quick and easy arch install.

Hoping @spikerguy might update a few for the zero as would like the minimal version as it does make a really quick and easy arch install.

It is already present but in developement stage as zero cannot boot from sdcard when using chainloader.

Its built weekly, you need to flash it on a usb drive and not sd card. 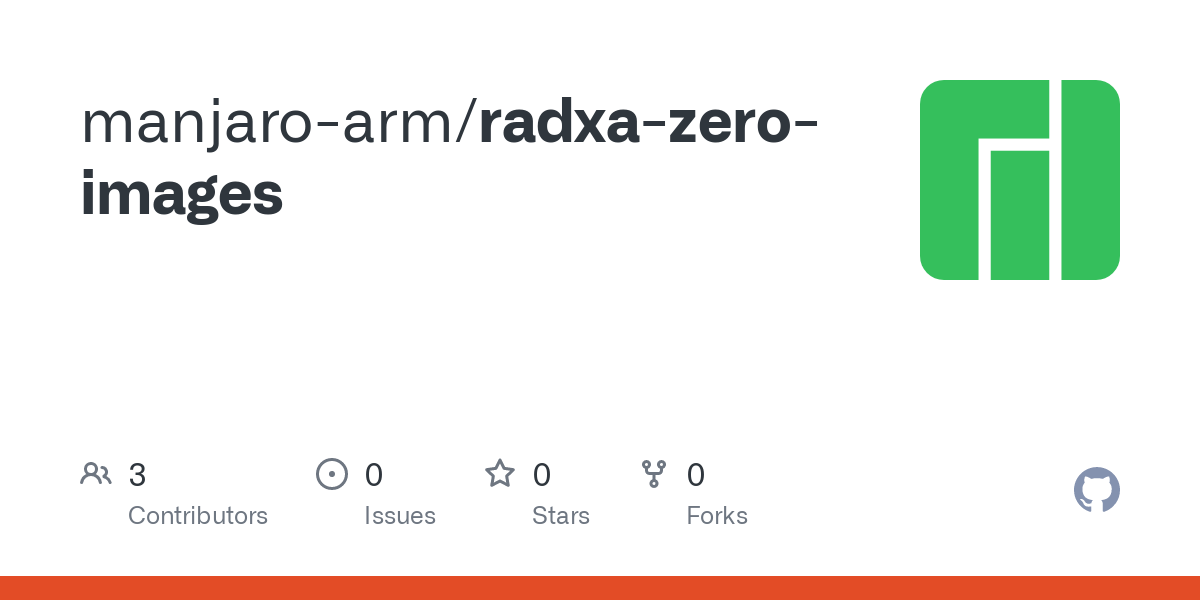 Contribute to manjaro-arm/radxa-zero-images development by creating an account on GitHub.

I have tested it myself and everything seems to work fine. Maybe need to update hdmi audio config as it uses older config for the audio.

Try it and let me know.

Yeah I haven’t done much of late apart from have it on my desk as the 2gb will boot like the settop boxes where if a SD card is inplace with an image it will boot and if removed it will boot the image from the eMMC.
The 512mb no eMMC I have so far haven’t managed to get it to boot and with a totally clean eMMC a SD card image will not boot until uboot.bin is written to the 1st boot sector of the eMMC.

That and waiting for a GPIO pin mux as worried again we are playing pin mux musical chairs with a 40 pin gpio and revisions to the loudest complaints.

I will give it a go and report back on github.

[EDIT]
PS because the eMMC already has uboot.bin at the 1st boot sector manjaro-minimal ran from sd
Seems like usual as really rapid to boot with much less of the bloat of Armbian.
I would tell you but the usb-boot button broke as it really is a flimsy piece of… but hey

uch less of the bloat of Armbian.

Since when independence from smelly boot loaders is considered as a bloatware?

I am not sure what you mean by independence from smelly boot loaders but this is why I don’t like Armbian as I find that level of response from its main developer(s) extremely worrying.
Smelly? is that some new technical speak or does Armbian boot by magic.
I even went onto your forum in an effort not to offend but to congratulate Armbian on removing and simplifying scripts and heralding that as a big improvement, where there are a load of scripts doing what many installs will do but in Armbian only manners, which I have always considered really bad and purposely scripting in support.
That is really problematic for someone who wants a minimal image to build up for certain specific applications as all these non standard Armbian only methods can cause loads of confusion.
You can tell by the image size to other comparable that there is obviously bloatware as they are a lot larger and whatever is installed is not needed as in the obvious much smaller images.

For me its bloatware and I actually do prefer debian bases (just more au fait) that my 2nd choice of a rolling release such as Arch take preference, but I so dislike what you guys do with so much that seems unnecessary and should be choice to install and documented and not having to weed out a load of scripts and installs that are not necessary that you can quickly ascertain from image size.

You do your thing and I will do mine, which is a preference for manjaro as I am not going to converse about ‘smelly’ bootloaders.

Is a terminology we invented for boot loaders that came with initial SDK which Chip integrator, Radxa in this case, gets in a package. Its main “feature” is proprietary hacks, badly or quickly made solutions and its usually maintained by one person. Or not even that. A part of smelly boot loaders usually also contain closed source / blobs. Sometimes this must go on, sometimes gets its open source variant.

but to congratulate Armbian on

That is really problematic for someone who wants a minimal image to build up for certain specific applications as all these non standard Armbian only methods can cause loads of confusion.

That I have absolutely no idea what you are talking about? So you are saying a collection of open source applications in alfa state is not confusing??

By looking inside. For people like you, we provide image with “minimal” in the name. We don’t build it in all variants, but we might so you could not pin that innovation to Manjaro

There is also a Dietpi which claims they have the slimmest one … but serious people should always asks for the price they need to pay for. More serious people build Linux with Yocto and Buildroot. Or with Armbian - in case they don’t have millions for R&D.

That doesn’t adds to the size in any way.

You do your thing and I will do mine, which is a preference for manjaro as I am not going to converse about ‘smelly’ bootloaders.

Manjaro basically just builds what drops from the sky and ship. If you choose as that is the best for you, can’t argue

As Armbian is a build system first … it also provides such option. This is mainly used by Balbes and others in the TV boxes section. Where smelly boot loader situation is default and nobody cares about.