Help with board not booting from PoE

TLDR: Two boards, one won’t boot from PoE, definitely the mainboard (or software) that is the problem, can anyone help me debug?

Hi, I have two identical setups:

Both booting from NVMe, from the same build (Debian 9) using the same guides. Both are connected to the same switch (Unifi 8 port 60w), using the same two sockets (have swapped both to eliminate anything to do with the switch). Switch shows <4w for the running board, and there are no other PoE devices connected.

One board will not boot from PoE alone, requiring USB power instead, I just get a green flashing light when using the PoE alone (according to @jack previously, this indicates that not enough power is reaching the board, or that the supply is irregular).

I have swapped the PoE hats, and the same situation holds - the same RPI does not boot, so I know that the hats are fine.

Can anyone help me with the next steps in debugging? I am running fairly simple packages at the moment, but I’m now going through comparing these to each other in the hope that I find something that looks different.

Do you have multimeter? Can you measure the voltage of GPIO PIN 2 when powering only from the PoE. To power the board from PoE, no software is required.

Do you have multimeter

Having the same problem here. Currently looking for my multimeter. Board gives flashing green light of of USW-8 and it gives the same thing when using a spare unifi POE adapter I have from the device that’s plugged into the USW-8 port. Adapter is exact spec the board calls for. Tried this with two nvme’s and two os’s.

Cheers @bradlees, @radxa any ideas on next steps please? Considering this is the 5v rail, I’m assuming that the board is not getting enough voltage quickly enough to recognise, and so not allowing the boot to happen.

Is this classed as a manufacturing defect? Are there any other steps I can take to check the board over? You can probably tell that I’m not an electrician… but I’ll happily electricute anything you tell me to

This seems a shortcut of the board makes the PoE reset. Can you check: 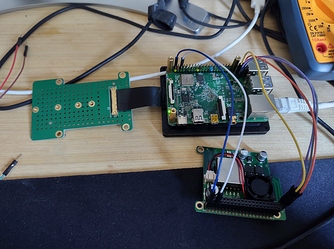 I get the same result, green light flashes every ~1s, no boot. Voltage pulses to 4v sometimes, usually between 2 & 3v, then back down to 0.

Hi @radxa or @jack, is there anything further I can do to get this moving?

Thanks for the picture and measurements. We are on the holiday now. We will look into this issue after the holiday(8th, Oct).

Hi @radxa, sorry I left this so long got very busy over here! However, wondering if you can give me any next steps or ways to investigate? I can boot the board from USB, just not from PoE alone.

Hi, were you able to solve this? I also have a similar issue where I have a RockPI X but the 13 watt POE HAT doesnt power the board - i’ve tried on several RockPI X boards and I am just getting a blinking blue light every few seconds.

Different board, so I could be wrong but the blinking blue light is data read on the 4C. My problem is that the power light (green on my board) blinks if I try and run it from PoE.

I did not get it resolved (@radxa)

Hi @jack @radxa is there anything further that can be done here?

If the answer is “new board” I’d like to know. I do appreciate that manufacturing is complicated and so some boards won’t come up to the same standard, but I’d love to get an indication of what could be wrong - just for my own learning.

Testing the good board:
Immediately goes to 5v and boots properly

Testing the bad board:
Goes to 3.5v in 1 second bursts, does not boot

Thanks @jack, I tried as you suggested:

I guess I’ll need to look for another board. Thanks for your help, you taught me some new stuff.

All the best,
Alex