I had an old but very nice 5 x SATA external case where i had a bananapi running for a long time with a 5-port SATA port multiplexer. Alas with all the problems of a port multiplexer and everything being terribly slow, i was happy when i discovered the RockPI4.

The setup now is RockPI4A with 2GByte memory, with RockPI 4A/B heatsink and ROCK PI 4x - M.2 Extension board v1.4 on which i have an IO 5 Port SATA miniPCIe x4 card to connect the 5 x 8 TB SATA drives. This is mounted internally into the external case. RockPI4A is powered by the cases power supply, had to solder a fitting internal cable.

Debian 9 from radxa wbpage worked out of the box, i am using the eMMC module for the OS. As i have no eMMC/SDcard adapter, i first installed debian onto a microSD card, and in that running system copied the OS img file onto the eMMC (and then removed the microSD).

The eMMC gives me 100MByte/sec read speed and 30 MByte/sec write speed, mode than enough for a snappy NAS, and i do not need to bother with what seems to be more compatibility issues of the nvme board.

The hard drives seems to be working stable with some read/write stress testing over a few days. When i read from all 5 HDD in parallel i get to a total of about 450 MByte/sec. So far i just use JBOD, so no experience with using linux raid5 software so far.

I had/have the following problems:

The miniPCIe card was USD 50, the AllNet RockPI components ca. USD 70, total USD 120, but of course in reality more because of shipping (if you can wait longer for shipping from china its cheaper ;-). One can argue pricing comparison with small atom solutions, but of course in my case a miniITX would not have fit into the case i have.

So, overall i am a very happy camper with my new rockpi4a NAS.

Btw: just enabled PCI gen2 in hw_intfc.conf and lo and behold i am getting a total of 780 MByte/sec throughput (up from 350 MByte/sec without it). Very nice.

There was one post in the forum i think that claimed pci gen2 was not fully supported, so i wonder if i should be afraid of enabling it (incorrect written data possible ?). 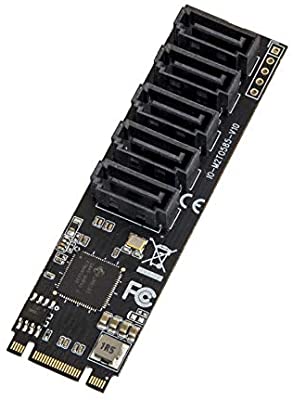 Btw. I have updated the wiki to document that it is possible to install onto the eMMC module even if you do not have an eMMC adapter (as i do have none) by first installing to uSD and then use that system to install to eMMC. This is what i did.

Hello.
Great configuration. Can you send links about the wiring between the APX power supply and the rock4 and rock sata and also, is its possible, the method to transfert fron SD to EMMC.
Thans a lot and sorry for the nobb langauge.

I bought a USB cables like these:
https://www.amazon.com/gp/product/B07V69C7Q6
The switch is nice to reset rockpi during testing, but its also difficult to find short USB power-only cables without switch. And normal USB cables tend to often have quite weak (high AWG). I just removed the USB connector on one side and soldered it to a power supply cable. Initially i connected it to the 5V of the power cable, but after reading up on the RockPI 4 power circuit and checking out the diagram i felt safe to wire it to 12V instead. This actually also makes the quality of the USB cable less of an issue, i just have to remember to NEVER CONNECT A RASPERRY TO THIS USB CONENCTOR ANYMORE (because its now a 12V USB connector

I thought i had put the installation to EMMC onto the Radxa wiki… but effectively, i just used pv or dd to copy the whole bloody SD content over to EMMC.

Thanks, It’s more clear for me for the wiring.

For the EMMC, i install the OS on the SD, start wthe it and the EMMC formatted, make PC or DD to copy SD on the EMC. Then switch off, release the SD and start with EMMC only, that’s right ?